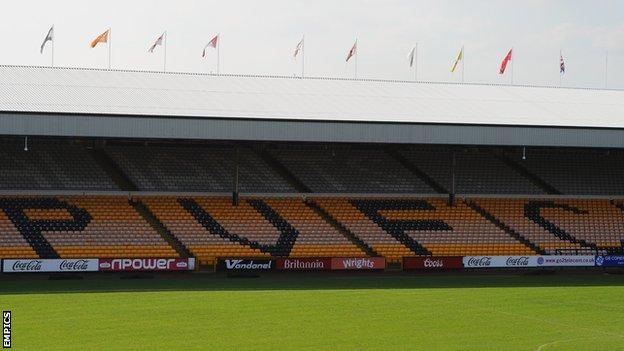 Port Vale could have new owners in place by the end of October if their latest takeover plans come to fruition.

Keith Ryder's summer-long bid to take over the League Two club came to nothing earlier this month.

But Bob Young, a director of the club's administrators Begbies Traynor, told BBC Radio Stoke that there are three new bidders, one of which unquestionably has the money.

"I'm confident that we can do a deal by the end of October," said Young.

"I don't want to air too much through the media until I've got something signed up, as I don't want to be in the position again that we were with Keith Ryder.

"But there are three who are serious about it, one of which I know has got the money.

"And I think we will be applying for approval in time for the Football League's next meeting in October.

"I'm reluctant to say too much as I know how disappointed the fans were when the Keith Ryder takeover kept on getting put back and put back.

"But the people interested are asking all the right questions and have got their solicitors involved.

"And I'd certainly be disappointed if we haven't sold the club by the end of the year, as we don't want to be going into the January transfer window with any uncertainty."

Vale have been in administration since March but they were allowed to re-sign more than half their existing squad on new contracts over the summer, while manager Micky Adams was also allowed to make new six new signings.

And a pre-season deal was agreed to ensure that they were not thrown out of the Football League - or docked any further points.

All the off-field distractions have so far not had an unsettling effect on Adams' side, who have made a great start to the season, lying second in League Two.