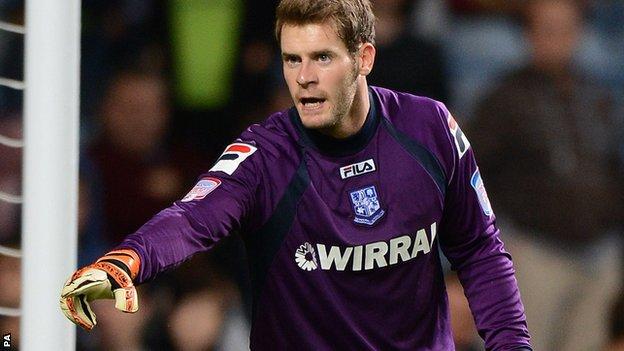 Owain Fôn Williams hopes his impressive start to the season will be noted by Wales manager Chris Coleman.

The 25-year-old believes he should be in contention to win his first Wales cap in the World Cup qualifiers against Scotland and Croatia in October.

"I can't do much more to be honest. We're on top the league and I've only conceded four goals," he said.

"One of those was a penalty and I've got five clean sheets. So, from my point of view, I'm very satisfied and I can only hope I can continue this form with Tranmere."

Goalkeeper has developed into a problem position for Wales since first-choice Wayne Hennessey ruptured his cruciate knee ligament in April.

The Wolves keeper has been given the all clear to step up his rehabilitation, but not in time to be considered for Wales's next two qualifiers on 12 and 16 October.

Manager Chris Coleman has used Jason Brown, Lewis Price and Boaz Myhill in goal since taking over, with West Brom's Myhill conceding seven goals in the two qualifying defeats to Belgium and Serbia in September.

But neither Myhill, nor Price or Brown, have been regular starters for their clubs this season.

Only Williams falls into that category, but he fears his exploits have not registered on Coleman's radar.

"Hopefully Chris Coleman, or anyone from Wales, will come to see me play and give me a fair chance," said uncapped Williams, an unused substitute for the summer friendlies with Mexico and Bosnia-Hercegovina.

Ronnie Moore, the Tranmere manager, certainly believes Williams is ready for an opportunity at international level.

Seeing a new maturity in his goalkeeper this season, Moore says Williams now has "total control" at the back.

"I do think Fonners has stepped up a level from where he was last season," said Moore. "He is more dominant now, has more authority in bossing his penalty area."

Williams, who hails from Penygroes in Gwynedd, has represented Wales from Under-17 to Under-21, but his burning ambition is to win his first senior cap.

"I dream about playing for Wales," he said. "That's my next goal. I've played up to the Under-21s, I've been in the full squad and the next step is to play.

"That is what I've always wanted. I can only hope the call will come soon but who knows what will happen?"