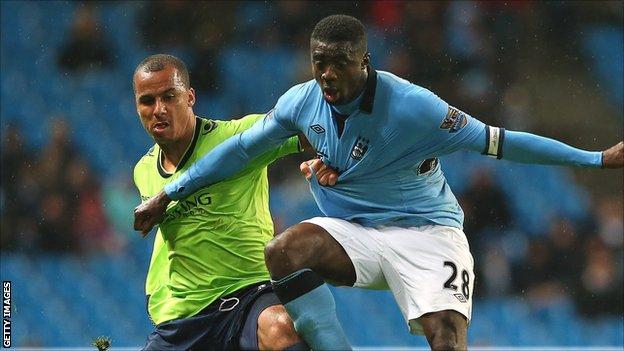 Kolo Toure says champions Manchester City must improve their defensive record to have any chance of retaining their Premier League title.

City have conceded 16 goals in eight competitive matches, including four against Aston Villa on Tuesday.

Toure told BBC Radio Manchester: "If you want to win the Premier League, you have to be able to keep clean sheets.

Manchester City have conceded 16 goals in their first eight matches this season:

"We haven't been able to do that as a team and we need to work on that with the manager, definitely."

Roberto Mancini made 10 changes to the side that drew 1-1 with Arsenal in their previous game when City were knocked out of the Capital One Cup by Paul Lambert's Villa.

The Italian has rotated personnel and formations in an attempt to make his team more solid, but the champions have conceded at least once in every game they have played this season.

"We leave the manager to make his decision," said centre-back Toure.

"He is the boss and he does what he thinks is best for the team. We are professional players and we just need to adapt to what he is doing."

City will look to bounce back from their League Cup exit when they visit in-form Fulham on Saturday.

"It's going to be a really hard game but we have great players and a good manager," said the former Arsenal man.

"We just need to play better, be more confident and defend better."