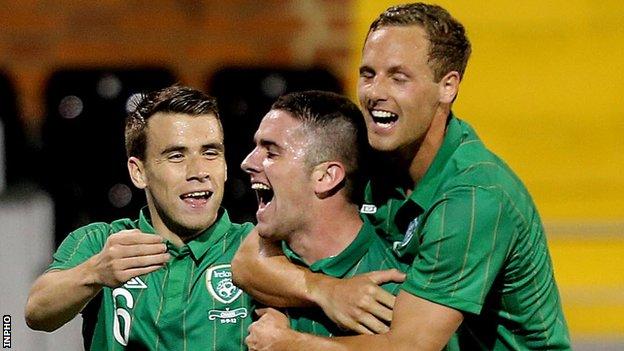 Robbie Brady's impressive Republic of Ireland debut against Oman has not proved enough to earn him a place in the squad for the World Cup qualifiers against Germany and the Faroe Islands.

The Manchester United youngster scored in the 4-1 win over Oman earlier this month but only makes the stand-by list for next month's qualifiers.

Richard Dunne is also on stand-by but is unlikely to be fit for the games.

The Irish host Germany on 12 October and face the Faroes four days later.

Aston Villa defender Dunne, 33, is currently out of action because of a groin injury.

Republic manager Giovanni Trapattoni said on Wednesday that it would take "a miracle" for Dunne to be fit for the two World Cup qualifiers.

Trapattoni is already having to plan without experienced duo Shay Given and Damien Duff who have retired from international duty.

Keith Andrews returns to the squad after being suspended for the opening qualifier win in Kazakhstan while Keith Fahey is also available after being injured for the game in Astana.

Brady, 20, volleyed in the Republic's second goal in the win over Oman and also set up two other goals in the Craven Cottage game.

Darron Gibson remains an absentee after making himself unavailable for the game against Kazakhstan because of his disappointment over his non-involvement at Euro 2012 - although the Everton man is currently out of action because of a groin injury.

David Meyler, Joey O'Brien and Alex Pearce are also left out after featuring against Oman.

Joachim Low's German side opened their campaign with a 3-0 home win over the Faroes before winning 2-1 in Austria to move to the top of Group C.