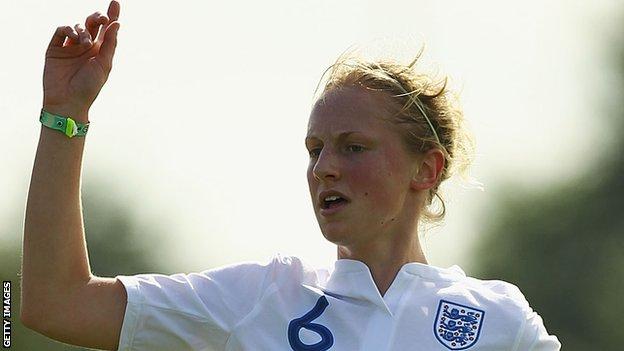 Women's Champions League new girls Birmingham City enjoyed an impressive European debut with a 2-0 win against Italians Verona in the first leg of their round of 32 tie.

After a scrappy first half, Rachel Williams opened the scoring from close range six minutes after the restart.

Kerys Harrop sealed victory over the 2008 semi-finalists, lashing home a second in the 70th minute.

The win give Blues a handy cushion when they go to Italy next week.

There were some anxious moments early on, with Blues goalkeeper Marie Hourihan having to make saves from left-back Claudia Squizzato and striker Cristiana Girelli.

Birmingham finished second in the FA Women's Super League (WSL) last year to earn their place in the Champions League.

But as Blues began to take control, striker Williams twice sent headers narrowly over the bar from good deliveries by midfielder Jo Potter.

Visiting keeper Stephanie Ohrstrom was not forced into a difficult first half save, but she became extremely busy straight after the break.

But the keeper could not keep out Williams's fierce close-range shot after the Verona defence had failed to clear captain Laura Bassett's 51st-minute cross.

And, after further pressure, the second goal arrived in the 70th minute - Ohrstrom blocking Williams's shot before left back Harrop lashed in the loose ball.

And, in stoppage time, striker Jodie Taylor went even closer, rolling a low shot past Ohrstrom - only for the ball to rebound off the foot of the post.

Despite those near-misses, however, Blues will be happy enough with their Champions League debut and a two-goal advantage for the second leg on Wednesday, 3 October.