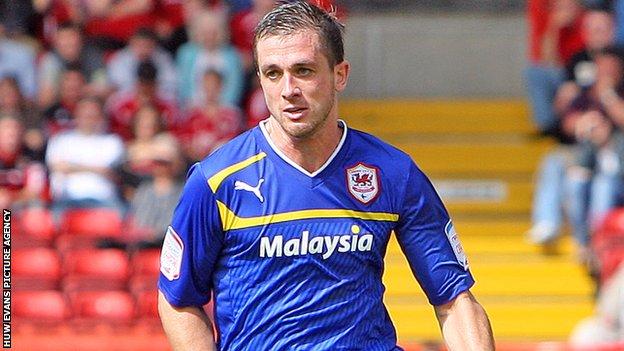 Cardiff City defender Andrew Taylor says he has been told in no uncertain terms to keep his hands down in a defensive wall in future.

With Cardiff leading 2-0 at Crystal Palace on Saturday, Taylor conceded a "silly" penalty by lifting his arm to block Andre Moritz's free-kick.

Glenn Murray scored, and added another two as Cardiff surrendered their lead.

"The manager [Malky Mackay] has made sure I'll be keeping my arms down in future," said left-back Taylor.

"As soon as I did it I knew it was a silly mistake. It was a silly reaction really, I didn't even realise what I was doing.

"It was just one of those things and hopefully I won't do anything like that again. As long as you learn from the mistakes you do, that's all you can do."

On Saturday, Cardiff welcome promotion rivals Blackpool, who also squandered a winning position in their last game by losing 1-3 at home to Huddersfield on Monday.

In Tom Ince and Matt Phillips, Blackpool have wingers to match the pace and trickery of Cardiff's Craig Bellamy and Craig Noone, and Taylor believes there will be no shortage of attacking intent from either side.

"They're going to be an open team - very attacking," he said.

"They'll want to get a three, four, five-goal lead but it's down to us to be solid, to see out there attacks and show our attacking quality on counter-attacks.

"They've got fantastic attackers, like ourselves. Tom Ince has had a very good start to the season. They've got [Gary] Taylor-Fletcher and Kevin Phillips, who is still a fantastic goalscorer.

"It's going to be a difficult game for us but with us being at home we should take the game to them and beat them."