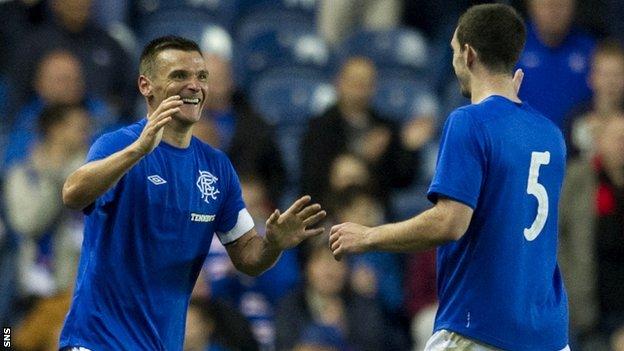 "We wanted to put a marker down to show that we can still compete," McCoist told BBC Scotland.

The performance of Rangers in their first match against SPL opposition since the club was relaunched and placed in Scottish Football League Division Three contrasted with many of their league peformances so far this season.

"That's the same group of boys who are getting stick, rightly so, for not performing well away from home in the SFL so let's not get carried away," said McCoist.

"The result and overall performance I'm thrilled with. I thought for long periods of the game we were terrific.

"There were some wonderful individual performances and I thought we deserved to win.

"I just thought, as a team, we gelled and one of the key factors was the energy levels that we had within the team.

"We scored two great goals [from Lee McCulloch and Dean Shiels] and I was particularly pleased with the back four keeping a clean sheet.

"Tonight's a very, very small step on what will be a long road."

Shiels did not finish the match due to a strain and striker Francisco Sandaza was stretchered down the tunnel in the first half following a clash of heads.

"It doesn't look too good," McCoist said of Sandaza's injury. "The doctor said he got a really sore one in his cheek bone."

Rangers will be the only SFL side in the quarter-final draw and McCoist added: "I fancy a home tie. You can't pick and choose but I would take a home tie against anybody."

Earlier in the day, Rangers chief executive Charles Green claimed to have "agreed in principle" to buy acquire Edmiston House, a three-storey building next to Ibrox currently owned by the club's former chairman and owner Sir David Murray.

And Green revealed he and Murray had discussed Rangers' use of employee benefits trusts, the focus of an ongoing SPL investigation and soon-to-be announced tax tribunal verdict.

"We have some plans for the property and these will be unveiled in the future," Green told the club website.

"Sir David is really keen to help the club. I welcome that.

"He has some clear views in terms of EBTs and there is no-one knows better than Sir David about that and he is prepared to do whatever is required to set the record straight.

"Whilst there may be some fans who are unhappy with Sir David there were lots of fans who were unhappy with Charles Green and I would like to think we have moved forward on that."