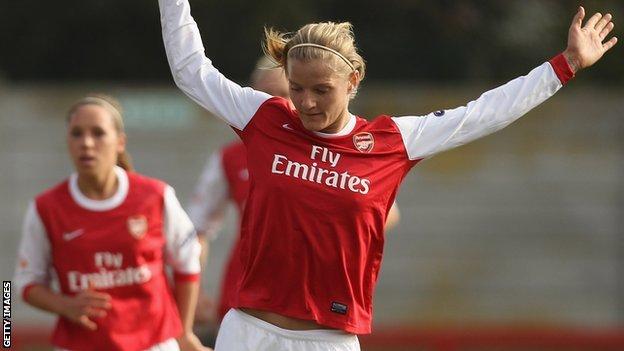 Arsenal kicked off their Women's Champions League campaign with a comfortable 3-0 win at Barcelona in the first leg of their Round-of-32 tie.

Jennifer Beattie, Jordan Nobbs and Katie Chapman were on target for the visitors.

The Gunners comprehensively beat a Barca side making their debut in European competition.

By contrast Arsenal, the 2007 winners, were starting their ninth successive Euro campaign and their 11th in all.

Playing at the Mini Estadi, in the shadow of the Camp Nou, Barca started well enough and both Sonia and Marta Corredera forced keeper Emma Byrne into good saves.

Striker Sonia proved a handful for the Arsenal defence but it was the Gunners who took the lead when midfielder Beattie headed home Kim Little's 31st-minute corner.

The goal changed the game and, within minutes, the home team's keeper Esther Sullastres twice kept out goalbound efforts by striker Ellen White.

But the visitors continued to press either side of the break and the second goal arrived in the 55th minute, midfielder Nobbs scoring with a 25-yard drive.

The lead was almost increased just after the hour as defender Steph Houghton hit the woodwork with a well-struck long-range effort.

Beattie and midfielder Little both went close to adding to the visitors' score as they maintained their grip right to the final whistle.

Arsenal now head into next week's home leg as hot favourites to reach the last 16.