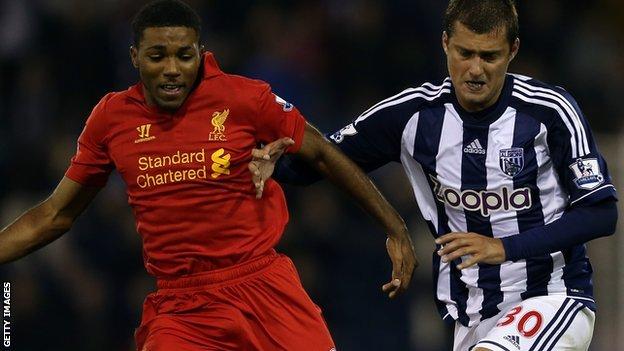 Brendan Rodgers says age will not be a barrier to players getting a chance at Liverpool as Jerome Sinclair became the youngest player to represent the club.

"For me it's about talent, irrespective of age," said Rodgers.

"It's congratulations to Jerome Sinclair. Our future is bright with the young players. The style and definition of our game is improving all the time."

Defender Jack Robinson was Liverpool's previous youngest player when he played against Hull in the final game of the 2009-10 season at 16 years 250 days.

He was also in the Liverpool side that won at The Hawthorns, along with fellow teenagers Andre Wisdom and Samed Yesil.

Suso, 18, made his third appearance in a week as he came on with Sinclair, while 17-year-old Raheem Sterling, who has become a first-team regular was left on the bench.

Sinclair was signed from West Brom and played for Liverpool's Under-18s last season.

He scored eight times in pre-season for the U-18 side and scored twice in their four games so far in this campaign.

"It was fantastic to see so many babies on the pitch. It was great," said Rodgers, whose side went behind to a Gabriel Tamas goal before Nuri Sahin scored twice to secure the win.

"If they have got talent and personality as well as the confidence and bravery to play football for me it doesn't matter how old they are.

"As long as they show that hunger to learn I would have no qualms about putting them in."

Liverpool will play Rodgers's former club Swansea in the last 16 of the Capital One Cup.

Rodgers said: "I'm really looking forward it. It will be a special night because it is two wonderful clubs.

"Swansea is a big part of my life and I was in no rush to leave."