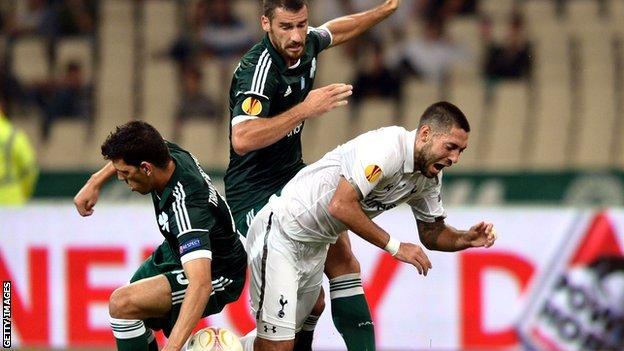 A first-half header from captain Michael Dawson had Spurs in a commanding position, but they failed to build on the momentum.

And Panathinaikos drew level with 13 minutes to go, Spanish striker Toche sliding in to finish past Hugo Lloris.

Spurs, who had seemed in total control, then had to hold on to take the point.

However, veteran goalkeeper Brad Friedel was left at home, handing only the second start of his Spurs career to deadline-day signing and France number one Lloris.

There was a change in defence too, with 35-year-old William Gallas dropped to the bench and Dawson preferred at centre-back.

And it was skipper for the night Dawson, 28, who broke the deadlock on 34 minutes.

Lazaros Christodoulopoulos upended Jan Vertonghen near the box, and Panathinaikos's players protested against the decision when they could have been organising their defence.

Dawson had seemingly the freedom of the area to run, rise and glance Tom Huddlestone's cross past Greek keeper Orestis Karnezis.

Much of the game was stolid and stifled in muggy Athens conditions, but Spurs still fashioned openings.

Panathinaikos's home ground is the Olympic Stadium in Athens, with a capacity of nearly 70,000. It was not full for the visit of Spurs, but it was sold out exactly a month ago when the US band Red Hot Chili Peppers filled the arena.

Inside three minutes they had a penalty appeal. A Steven Caulker header back across the box from a Gareth Bale corner struck the arm of defender Andre Pinto, but the referee was unmoved.

Powerful attempts either side of half-time from Bale, Aaron Lennon and Jermain Defoe came to nought, and Karnezis had few challenging saves to make.

On the half hour, Lennon surged forward unchallenged and unleashed a fierce drive, but it was straight at the Panathinaikos stopper. A swerving Bale attempt 10 minutes before half-time was tipped wide, and with 15 minutes remaining a Defoe effort bound for the bottom corner was unwittingly blocked behind by Panathinaikos captain Loukas Vyntra.

The hosts, who are in turmoil domestically - sitting fourth from bottom in the Greek Super League - posed little threat to Spurs for most of the 90 minutes, but took the one clear-cut chance they created.

Midfielder Giourkas Seitaridis collected the ball on the right flank, then slid in a pass which dissected the Tottenham centre-back pairing of Dawson and Caulker.

From that moment on Tottenham had to weather a storm of Panathinaikos shots, crosses and long throws into the box. They succeeded, but will look back on the match as a series of missed opportunities.

"I don't think we were complacent. We have to give credit to Panathinaikos, they pressed much more and started to gain belief from that and that led to the goal.

"I think the whole team felt a bit disappointed because the first half was so positive and we were in control of situation.

"We were a bit sloppy in the second half. I understand the disappointment at not putting the game to bed, but in the end we congratulated the players because if it had been other way round, the whole perspective would have been different.

"In the end it leaves us with two points. Maribor have three and Lazio have four so everything is open as we go into the double-headers."