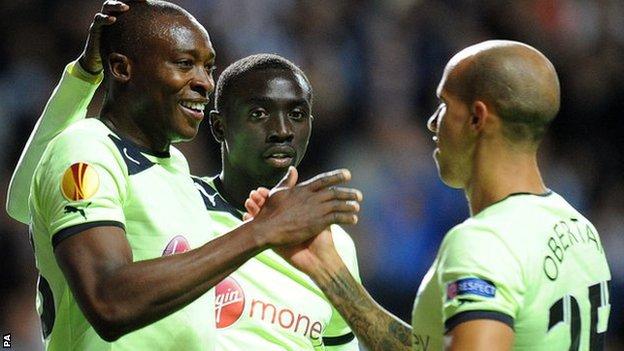 Newcastle kickstarted their Europa League campaign as they eased to a first Group D win by beating Bordeaux.

The Magpies asserted their authority after 16 minutes, with striker Shola Ameobi sidefooting home after a low cross from Gabriel Obertan.

They doubled their lead when Bordeaux defender Henrique diverted Danny Simpson's centre into his own net.

Papiss Cisse, who looked marginally offside, guided in a third from Shane Ferguson's cross just after the break.

Newcastle's power and pace were too much for Bordeaux to handle as the Ligue 1 club's unbeaten 17-game run came to an emphatic end.

The French side looked pretty in first-half patches but lacked penetration and they have now lost on each of the five trips they have made across the Channel to play English opposition.

Newcastle boss Alan Pardew made seven changes as he weighed up sending out a team strong enough to beat Bordeaux against keeping his players fit and fresh to play Manchester United on Sunday.

He still selected a Magpies line-up with the strength of Cheick Tiote, the style of fellow midfielder Yohan Cabaye and the threat of striker Cisse.

Cabaye, who has been trying to recapture his dynamic form of last season, quickly showed signs of doing so when his angled shot from the edge of the area went narrowly wide of the far post.

The visitors might have gone in front but for striker Ludovic Obraniak heading over from 10 yards.

That miss was soon punished, however, when Cabaye instigated a well-worked Newcastle move.

The Frenchman sent a sweeping cross-field ball to left-sided winger Obertan, playing against his former club. He jinked past a defender before sliding a low cross to the far post where captain Ameobi applied a simple finish.

Bordeaux showed some of their flair in a move which led to Yoan Gouffran having a shot deflected high off defender Mike Williamson.

A long-range Ludovic Sane strike was palmed away by home keeper Rob Elliot before Bordeaux's efforts were undone with an inexplicable own goal.

Right-back Simpson, back after a hamstring injury, swung in a cross which keeper Cedric Carrasso was positioned to catch before Henrique launched a leg at the ball and put into his own net.

Vurnon Anita had a shot fended away by Carrasso but the game was all but wrapped up by the Tyneside club when Ferguson's cross was met by Cisse, whose first-time effort went in off the far post.

With victory sealed, and keeping more than one eye on Sunday's visit of Manchester United, Pardew had the luxury of withdrawing Cabaye and Tiote.

"What pleased me most is that we played with verve and energy again. That is a good sign.

"We had to play very well to make that as comfortable as it was. We knocked the spirit out of them in terms of the clinical nature of our goals.

"That was a team that hasn't been beaten for 17 games so that is a great result. For me as a manager, it was a perfect night."