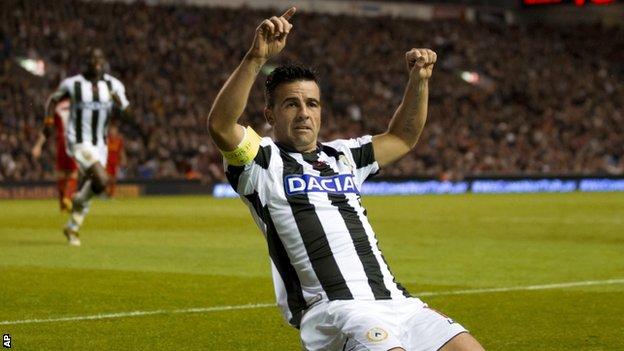 Antonio Di Natale delivered a virtuoso display as Udinese came from behind to stun Liverpool in the Europa League.

Brendan Rodgers' side dominated the first half, snatching the lead thanks to a thumping header by Jonjo Shelvey.

But the Italians came roaring back after the interval, with Di Natale scoring 32 seconds after the restart.

An own goal by Sebastian Coates and a low strike by Giovanni Pasquale meant Luis Suarez's sublime free-kick was nothing but a consolation.

It was a result that Brendan Rodgers and his young side will find hard to stomach. A third successive home defeat tells only part of the story of a game from which the Reds should draw encouragement as they dictated for long spells.

And yet Udinese were everything their Premier League opponents were not - streetwise, hard-nosed and ruthless when presented with a chance.

The home side, who are left third in Group A as a result of this defeat, dominated the opening 45 minutes, displaying a renewed swagger and assurance as they plotted a series of eloquent attacking moves and found passing angles with great precision.

Liverpool deservedly led at the break, having starved Udinese of possession, much to Rodgers' delight, but their failure to capitalise on their dominance would come back to bite them after the interval.

Shelvey started and finished the move, switching the ball wide to Stewart Downing on the right flank. The winger drifted beyond Maurizio Domizzi before delivering a driven cross which Shelvey met with a header that was too powerful and well-directed for Udinese goalkeeper Zeljko Brkic.

Udinese were threatening in fits and starts, with Liverpool goalkeeper Pepe Reina forced to make a stunning save low down to his right as he tipped Mehdi Benatia's close-range header to safety.

Di Natale was a constant threat for the Italians, his darting runs and willingness to shoot forcing Reina into action twice more.

The Italy international was warming to the task and, 32 seconds into the second half, he scored the goal that changed the complexion of the game.

Andrea Lazzari, only just on as a substitute, robbed Glen Johnson of possession and exchanged passes with Di Natale before the veteran striker clipped the ball beyond Reina. Liverpool were visibly shaken by the goal and the game was swiftly put beyond them.

Rodgers threw Steven Gerrard and Suarez into the fray as Liverpool attempted to reassert their dominance and the Uruguay striker might have scored moments after coming on, had Shelvey not inadvertantly cleared his goalbound shot off the line. But while Liverpool pushed for a winner, Udinese had a sting in their tail.

Two goals in three minutes saw the Italians decide the tie as Coates headed past Reina before Di Natale delivered a beautifully timed pass that allowed Pasquale to drill a low shot beyond the Liverpool keeper.

But before despondency could set in among the home support, Suarez roused them with a fizzing free-kick, curling the ball up and over the Udinese wall with too much power for Brkic.

With 15 frantic minutes remaining, Suarez twice went close, while Gerrard's goalbound shot was blocked. Raheem Sterling was also introduced but was unable to take either of the two late chances that fell to him as the game slipped away.