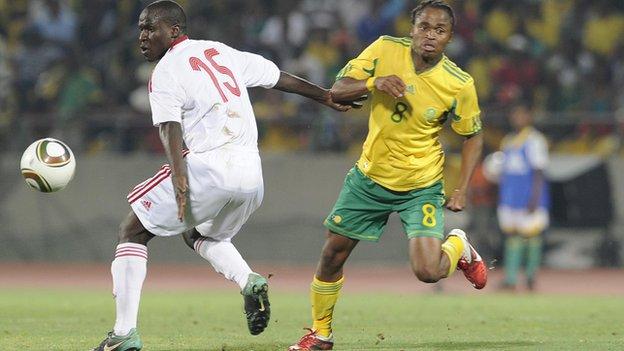 South Africa will step up their preparations for the Africa Cup of Nations with two international friendly fixtures next month, against Poland and Kenya.

The 2013 Afcon hosts are to play Poland in Warsaw on 12 October, followed by a meeting with the Harambee Stars in Nairobi four days later.

Bafana Bafana head coach Gordon Igesund sees these two matches as key to getting his squad into shape for the Cup of Nations.

We are not afraid to lose ... we need to be challenged so we can see where we are.

He said: "Initially I felt it was prudent to play African opposition considering we will be playing in the Afcon tournament in four months time, but after seeing the opposition available, I decided Poland was the best option.

"Most of the top African teams are involved in the 2013 qualifiers, therefore we had no tough opponents to play against. We need to play strong opposition so we can be tested thoroughly."

Igesund even considered a fixture against Egypt, who have already failed to qualify for the Nations Cup, but they are due to be on a tour of the United Arab Emirates.

"They could have been great opposition for us," he said.

"We are not afraid to lose, which is why we don't need to play weak opposition. We need to be challenged so we can see where we are."

Bafana Bafana will arrive early in Poland, on 9 October, in order to acclimatise to the cold east European conditions.

The team leaves Warsaw on the morning of 13 October for Nairobi via Amsterdam and will arrive in the Kenyan capital on the same day. They will have two days of training before playing the east Africans.

Igesund is expected to announce his travelling squad next week.