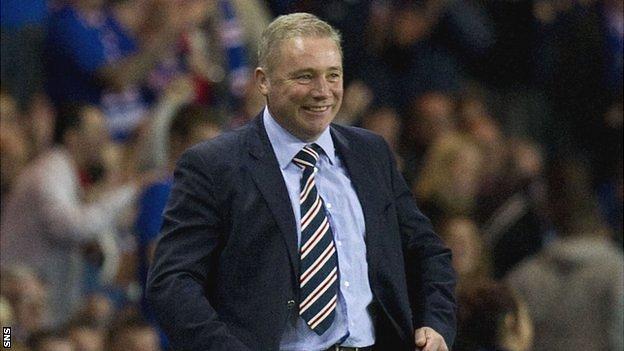 Ally McCoist insisted in the immediate aftermath of his Rangers side's 2-0 defeat of the Scottish Premier League leaders Motherwell he and his players had not set out to show the SPL what it's missing.

Certainly the club's supporters were keen for their team to prove a point, which they vocally rammed home as first Lee McCulloch and then Dean Shiels put the Third Division side into the last eight of the Scottish Communities League Cup.

On the field, there was little doubt that each player had raised his game to show that Rangers were able to live with what McCoist suggested afterwards was the "form team in Scotland".

There were several individual performances to please the manager.

Emilson Cribari and Anestis Argyriou have failed thus far to set the Third Division alight. But both impressed against Motherwell, with Cribari handling Michael Higdon about as well as any defender has done so far this season.

Against SPL opposition, though, it surely has to be the assured displays of some of the club's homegrown talent that most satisfy McCoist.

Fraser Aird, having shown glimpses of his ability as a substitute against Montrose on Sunday, was given a starting berth and belied his tender age - 17 - with a confident performance on the left wing, which might have been rewarded with a goal on more than one occasion.

Lewis MacLeod, who has featured regularly this season, did not look out of place in a midfield contest with such seasoned SPL campaigners as Keith Lasley and Tom Hateley.

And Kyle Hutton, not quite as wet behind the ears as Aird or MacLeod, came on as an early substitute for Francisco Sandaza and reminded fans why he had earned a breakthrough into the top team under Walter Smith, raising questions as to why he has failed to flourish under McCoist.

Recently the Rangers manager has been emphasising that his priority is to get out of the Third Division, playing down the importance of a cup run, increasingly so it seems since the Ramsdens Cup exit to Queen of the South.

But there can be little doubt that Wednesday night's match whetted the crowd's appetite like no other has done in this remarkable season.

Despite what McCoist said, there was a palpable feeling of defiance in the air and there can be little question that the performance level was raised as a result.

Rangers passed an important test against Motherwell and would feel confident of taking on just about any other SPL team at home in the quarter final.

Away games haven't really worked out for Rangers this season, but there is an argument to be made that a trip to an SPL ground would be less daunting in a strange way than those to Balmoor and Shielfield Park have been.

The ultimate fantasy for many with a vested interest would of course be a meeting with Celtic.

The supporters would love it, though the tensions between the two sets of fans actually seem to be higher now than when they played in the same league and a meeting of the pair would see those simmer even further.

The media would also have a field day, with such a tie generating even greater interest than the most meaningful of clashes down the years.

That, though, is for the future. What Ally McCoist must do now is somehow extract performances such as the one on Wednesday when the stakes don't necessarily look so high - away to Annan or Peterhead, for instance.