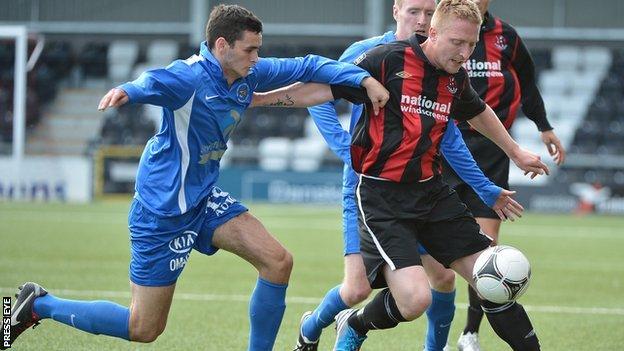 Ballinamallard United expect to have midfielder Stuart Hutchinson back in their squad for Friday night's Irish Premiership clash at home to Glenavon.

Hutchinson's return from injury is a further boost to United who are up to fourth after three wins in a row.

"It is three clean sheets as well which is good," said manager Whitey Anderson.

"We are delighted with the start but football can kick you in the teeth if you lose a couple of games, so our target is still Premiership survival."

Ballinamallard, eight matches into their first season in the top flight, have enjoyed wins over Cliftonville, Portadown and Donegal Celtic, but will face a Glenavon team smarting from a second-half collapse at home to champions Linfield.

Crusaders will be without experienced defender David Magowan for their trip to Portadown after his red card in Tuesday's County Antrim Shield win over Bangor.

Crues boss Stephen Baxter called the dismissal 'a joke' as he felt Magowan had made a clean tackle on opponent Chris Shimmon.

"We are missing David on Friday and that shouldn't be," said Baxter.

Portadown's Sean Mackle will also miss the Shamrock Park game as he was sent-off near the end of last weekend's 3-2 defeat by Cliftonville.

The Ports, last season's runners-up are 10th in the table, having not won a league game since the opening day of the campaign.

Linfield, up into the top half of the table after that win at Mourneview, are at home to bottom club Lisburn Distillery.

Glentoran's unbeaten start to the season will be tested by a trip to Ballymena United while Donegal Celtic's search for a first win takes them to Premiership leaders Cliftonville.