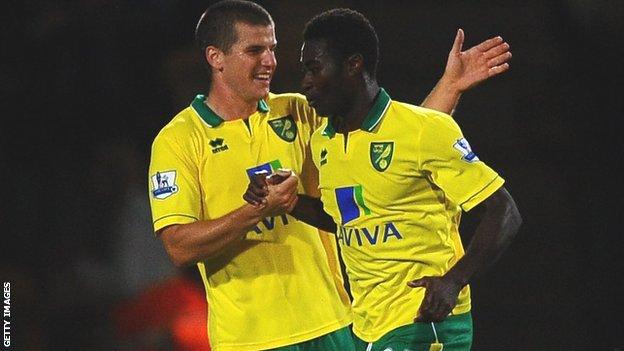 Norwich midfielder Alexander Tettey hopes his debut goal will lead to an opportunity to prove his worth in the Premier League.

Tettey, 26, marked his first appearance with the only goal in Wednesday's Capital One Cup victory over Doncaster.

But he told BBC Radio Norfolk that playing in the Premier League was one of the reasons he joined the club.

"I just have to be patient again, work hard and try to take the chances I get," the Norway international said.

"I cannot promise scoring goals like this every week, but the way we play suits me because I can go forward when I see the opportunity."

Canaries boss Chris Hughton chose to make several changes for the game against League One Doncaster and Tettey's big moment came in the first half when his curling shot from outside the box flew in off the post.

Ghana-born Tettey, who was named man of the match, has been capped 14 times by Norway and Norwich paid an undisclosed fee when they signed him from French club Rennes last month.

"Probably at that stage (of the game), we needed that. Doncaster worked very hard to get behind the ball - we put in a fair few crosses in the first period and they defended very well," said Hughton.

"What was probably more important than the goal was that he was able to get 90 minutes under his belt.

"It's been quite difficult for him, he came and then went straight away on international duty so he hasn't really had that sustained period of training with the team.

"The 90 minutes was important but to add the goal was nice for him as well."