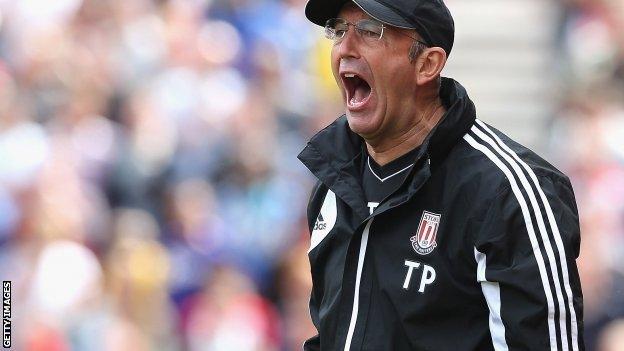 On Thursday, he said: "The FA should pull people up for diving and give them a three-game ban straight away.

"Ivanovic would be looking at three games, Chelsea wouldn't be too happy with him and I don't think he would be diving around any more."

BBC Sport's Mark Lawrenson on Match of the Day

"They are both dives. Ivanovic goes down like Jimmy Krankie and threw in a bit of a twist. Oscar should have had an Oscar the way he went over."

Chelsea were not awarded any penalties during the Premier League game at Stamford Bridge and Oscar was booked for diving, while Ivanovic escaped a yellow card despite going down in the box when he appeared not to be touched.

Pulis, whose defender Andy Wilkinson is serving a three-match suspension for a violent conduct, added: "They are really quick to pull people up on incidents that they think are bookable or sending-off incidents.

"We just don't think it's right and we encourage the players to be as honest as they can.

"Michael Kightly stayed on his feet [in a separate incident] and rightly so.

"We think it is the way to do it - whatever other clubs do, they do."