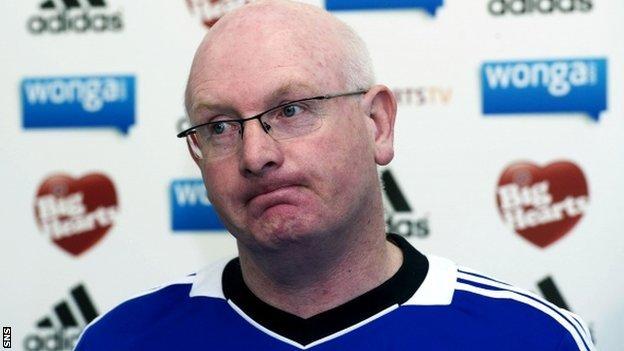 Hearts boss John McGlynn says the Scottish Football League missed out on the chance to promote the League Cup by not holding the quarter-final draw straight after Wednesday's matches.

"It would have been nice to have the draw last night," said McGlynn.

"In England, they had the draw after their games last night."

McGlynn, , feels the SFL has been "shown up" by the authorities south of the border.

He added: "They have big ties that everyone is talking about.

"People don't even know when the draw [in Scotland] is taking place.

"It kills it for a few days now. It's incredible."

The Hearts manager said that when the draw does take place, some time next week, he is hoping to secure one of the four home ties.

"I think everyone is the same," he said.

"It means that four clubs will be happy and four won't.

"You just have to play the cards you are dealt and get on with it."

Meanwhile, Hearts captain Marius Zaliukas says he is "open" to discussing a new contract but is unsure when such talks will take place.

"I'm getting 29 very soon and, obviously, it's going to be a headache later on."