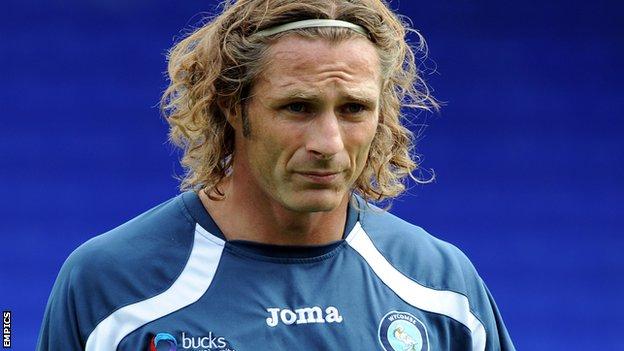 Wycombe Wanderers caretaker manager Gareth Ainsworth has been told to grab his chance with both hands by former manager Gary Waddock.

The 39-year-old was put in charge after Waddock was sacked last weekend.

Ainsworth told BBC Three Counties Radio: "Being a friend of Gary's and one of his coaches and knowing him for a long time, I was gutted he had to go.

"But I've been in contact with Gary since and he said take your chance, it's your turn."

Ainsworth continued: "That's one of the great things about the man - he's a top guy and I'm sure he'll find another club."

Ainsworth had two spells as caretaker manager of former club Queen's Park Rangers, after Iain Dowie left in October 2008 and again when Paulo Sousa departed the following April, and is now interested in taking the Wycombe post on a permanent basis.

He will be assisted by Richard Dobson and has taken over with the Chairboys having taken just four points from their first seven games in League Two.

Ainsworth is expecting a positive response from the players and does not envisage previously been one of their team-mates proving a problem.

"A couple of years ago I was on the nights out with the lads and the team-bonding and now all of a sudden I'm telling them what to do," he said.

"In all fairness, what a good set of lads I've got and what an understanding bunch.

"They've took it on themselves to listen to me and do what I say and they know I do want a crack at this.

"Hopefully with a bit of luck and a bit of hard work, we can get some results."