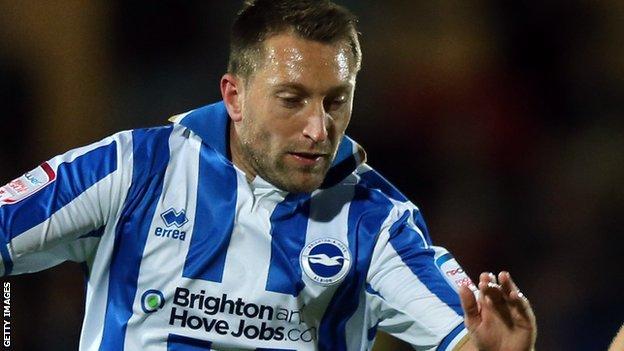 Brighton forward Stephen Dobbie hopes he will make his first start for the club against Birmingham on Saturday.

The 29-year-old signed from Swansea on transfer deadline day, but has made just two substitute appearances so far.

However with top scorer Craig Mackail-Smith out with a hamstring injury, Dobbie thinks his opportunity may come.

"Hopefully I'll get my chance and if I can get a few goals to help the team keep progressing, that's what I'm here to do," he told BBC Sussex.

The former Hibernian, St Johnstone and Queen of the South man admits he has struggled to settle since arriving at the Amex Stadium in August, but believes he is now on the right path.

"I feel as if I'm settled in now. I'm still living in a hotel just now, as the house isn't ready until Saturday," said Dobbie.

"It's taken me a wee bit longer than I would've liked to settle in, but at the same time the team has been playing well and winning games.

"It's just a matter of biding your time and when you get your chance show the fans what you can do.

"I think a lot of people don't realise when you're trying to get a house sorted and living in hotels it's not the greatest. But I'm settled in now - I move in on Saturday and I'll be ready to kick on."

Dobbie arrived from the Liberty Stadium on transfer deadline day along with winger Andrea Orlandi and has taken encouragement from how quickly the Spaniard has adapted to life on the south coast.

"You can see the way Andrea has fitted in and he's playing really well just now, so I'm sure once I get my chance I'll get in the team and score some goals."