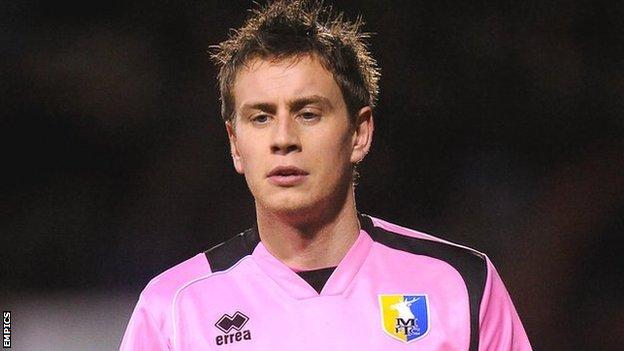 Mansfield Town manager Paul Cox fears he could be without goalkeeper Alan Marriott for up to three months because of a dislocated shoulder.

Marriott was hurt in a challenge with striker Matt Green in training on Wednesday and Cox is already looking to sign a replacement on a loan deal.

Cox told BBC Radio Nottingham: "We are keeping our fingers crossed but fear the worst. It could be three months.

"It will be a massive loss. He's one of the better keepers at this level."

The 34-year-old former Lincoln goalkeeper tweeted: "Yes it's true I have bust my shoulder!! #unbelievablepain."

Back-up keeper Shane Redmond also suffered an elbow injury during training, and although that is not not expected to be serious Cox said they have to bring in another keeper.

"We don't know how bad Shane's injury is," Cox added. "He was really sore but we have to sign another keeper anyway. We can't go on with just one goalkeeper at the club.

"We hope to get someone in asap. There are one or two we have been keeping an eye on anyway."