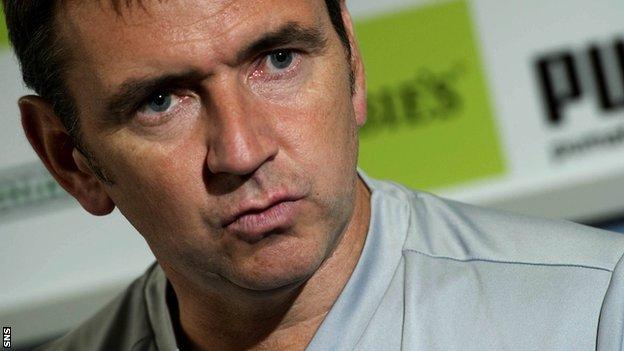 Hibernian travel to Aberdeen on Saturday looking to maintain their bright start to the season and end the Dons' unbeaten run of eight matches.

Like the Pittodrie outfit, Pat Fenlon's side have not lost in the Scottish Premier League since the opening day.

"Your home form is really important," said Fenlon, whose team sit second in the table after three wins from seven.

"But you've got to go to difficult places like Aberdeen and try to pick something up on the road."

The Irishman added: "You've got to get the balance right.

"When you look at the points, I don't think anybody has put a very, very good run together."

In Hibs' last game, a 2-2 draw at Easter Road against Inverness Caledonian Thistle, they were pegged back by the Highlanders despite leading 2-0 after half-an-hour.

"On Saturday, the positive side was that the players were so down because we didn't win the game," Fenlon said.

"You've got to be disappointed when you don't win football games, particularly at home, but try to take positives out of it.

"As a team we've got to be mentally stronger and be more alert.

"A lot of the goals we've conceded have been off second balls coming back into the box."

The SPL table is tight, with only five points separating the top 10 teams.

Fenlon is aware that securing a few victories can have a dramatic effect on a team's league placing and that results depend on the ability to score when the opportunity presents itself.

"There have been chances at both ends in the games we've played," said the Hibs boss.

"A lot of the games have been like that.

"From speaking to a lot of the other managers, it seems to be the case in most of the games that teams are not completely dominating other teams."

Hibs' chances of a win at Pittodrie have been boosted by the likely return of top striker Leigh Griffiths, who is recovering from an ankle injury sustained against Kilmarnock.

"He has done on Monday and Tuesday, a bit of work with the physios," said Fenlon on Thursday of the on-loan Wolves goalscorer.

"Today he is in with the whole squad and he will be back in tomorrow.

"He has been fantastic [this season] but a big plus from last week was that when we didn't have him, we have strikers in the team who are ready to take up the mantle when he doesn't score."