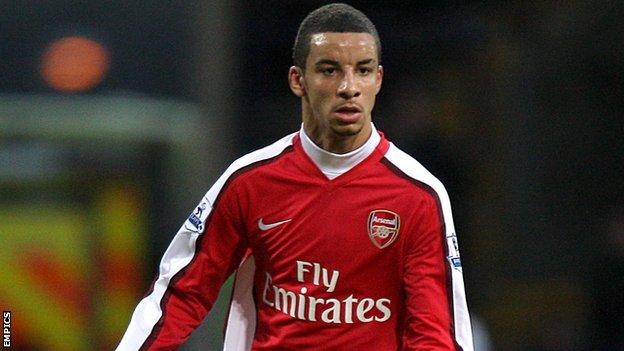 The trio will be on loan with the Essex club for three months and are the first recruits of new boss Joe Dunne.

Eastmond and Watt, both 21, have featured in Arsenal's first team but have also had a number of loan spells away from the Emirates Stadium.

Ibehre, 29, has only made one league start for the Dons this season.

All three will be available for Colchester's game against Hartlepool on Saturday, subject to the relevant paperwork being completed.

"I want to play as much as I can in the next few months and show the manager here and Arsenal what I can do," said Eastmond (pictured), who has previously been on loan at Millwall and Wycombe.

"Hopefully, I'll gain some good experience from my time here."

Both he and striker Watt were members of Arsenal's FA Youth Cup-winning side in 2009, while the latter has also represented England up to Under-19 level.

"It looks like the manager plays the same formation as I'm used to so it should be good for me," said Watt, whose past loan spells have taken him to Southend, Leeds, Sheffield Wednesday and Crawley.

"I want to fight for my position in the team, keep my place if I get it and do well for the club and for myself.

"Hopefully, we can play well, pass the ball around, score some goals and push up the table."

Ibehre, who began his career at Leyton Orient, has been training with Colchester for most of the week.

"Walking into a new changing room usually feels like it's your first day at school again but I knew a few faces so it was easier to introduce myself.

"I was buzzing to come here and play when I heard a couple of weeks ago that there was interest from Colchester United," he told the club website.

"As a footballer, you just want to play so I was really happy that an opportunity had opened up."