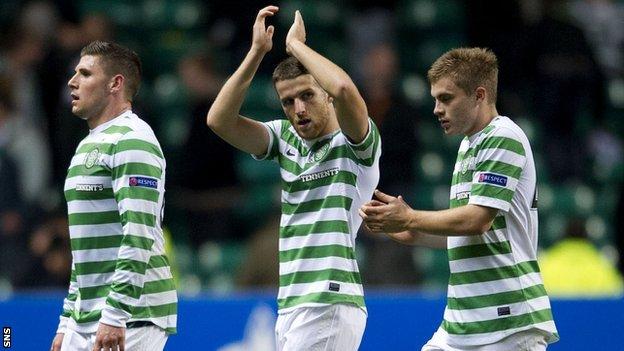 "Those players are all in talks at the minute with their respective parties. We're hoping to get over the line with all of them," said Lennon.

"The likes of Mulgrew, Wanyama, Matthews, Forrest and Hooper have played brilliantly for me and I want to reward them for that level of performance."

in on Tuesday and Third Division Rangers' 2-0 win against Motherwell in Wednesday's third-round meeting has opened up the possibility of an Old Firm encounter.

"If we keep winning and they keep winning in the competitions then there's a good chance of that but we'll see what the draw brings," said Lennon.

"I'd fancy anyone, as long as we're at home. It'd be nice to get another home tie, it gives us a decent advantage in these competitions.

"The players love the [Old Firm] games and they do bring an energy and excitement to the game."

Lennon's side can go top of the Scottish Premier League if they beat leaders Motherwell at Fir Park, with Celtic have an 15:00 BST kick-off on a Saturday for the first time in several years.

And Georgios Samaras could return to the squad after being injured on international duty with Greece earlier this month.

"We'll get an extra hour in bed maybe and we'll not be eating pasta for breakfast," joked Lennon.

"Regardless of the outcome, it's important we win the game. Motherwell have started the season very well.

"Samaras is a key man. We've missed him at times, he does seem to thrive in the European environment and we will give him every opportunity to be fit for Saturday and Tuesday [against Spartak Moscow in the Champions League]."