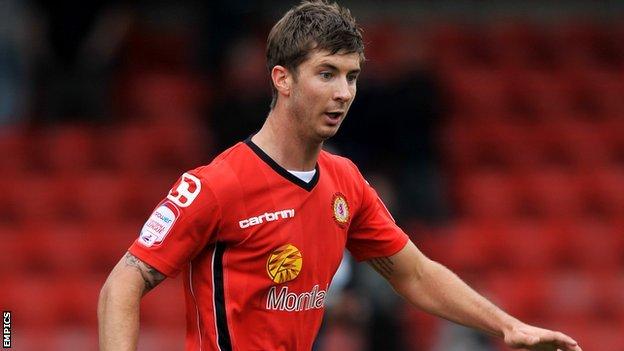 Crewe Alexandra captain Luke Murphy has signed a new two-year deal with the League One club.

The Alsager-born midfielder, 22, is the last of this summer's out-of-contract players to commit to a new deal.

But he says that it was always his intention to agree a new deal with Crewe manager Steve Davis.

"I had some talks with Steve and we both knew where we were going with it. There was never doubt in my mind," he told the Crewe Alexandra club website.

I am approaching 150 games, which is a good return for a 22-year-old

Murphy has netted 17 goals in 148 appearances for the Cheshire club since making his first-team debut in December 2008.

"Crewe are the team I've always played for growing up," he added. "It is a pleasure to play here and everyone knows the style of play suits me.

"This is my local team. It is an honour to captain Crewe and we are very much on the up after what we achieved last season.

"This is where I want to play and improve and I know I am at the right club to help my development.

"I am approaching 150 games, which is a good return for a 22-year-old, so all I've got to do is keep pushing on and become better.

"I didn't want the contract talks to interfere with the games we were playing and the fact that I was out of the team after coming back from injury. I just wanted to concentrate on my performances and helping the team."