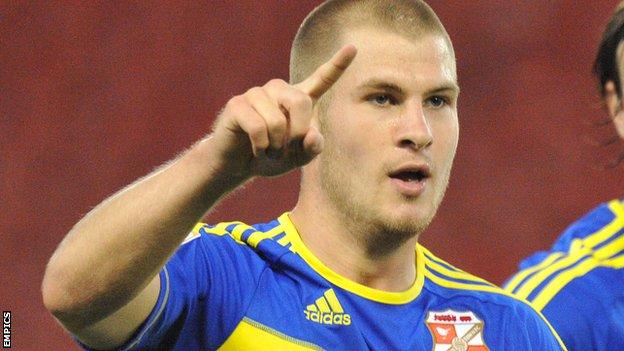 Swindon striker James Collins says any negative reaction from Shrewsbury fans on his return to the Greenhous Meadow on Saturday will spur him on to score.

Collins, 21, spent 18 months with the Shrews before joining League Two champions Swindon in the summer on a two-year deal.

"I don't think I'll get the best reception, but that is part and parcel of football," he told BBC Wiltshire.

"If I get the nod to play then hopefully I can go there and score."

The former Aston Villa trainee scored 22 goals in 66 league appearances for Shrewsbury, helping them to finish second and claim automatic promotion to League One at the end of last season.

Manager Graham Turner offered Collins new terms in a bid to keep his top scorer, but the two parties failed to agree a deal.

Swindon swooped for Collins' signature and were forced to pay out £140,000 to Shrewsbury, plus add-ons, following a Football League tribunal.

"When I left the fans on Twitter and in the papers wrongly seemed to think I'd left for certain reasons," he said.

"It's disappointing but you've got to expect it. I understand why they think it but I'm not that bothered.

"I enjoyed my time there and we got promoted, which is what the club wanted to do, and I helped them by scoring a few goals."

Since arriving at the Country Ground, Collins has played 10 games, with all three of his goals coming in their 4-3 Capital One Cup victory over Stoke.

"If I can get my first league goal there it will give me a lot of confidence," he added.

"[Boos] will always spur you on to go and prove a point and it can bring out the best in you."