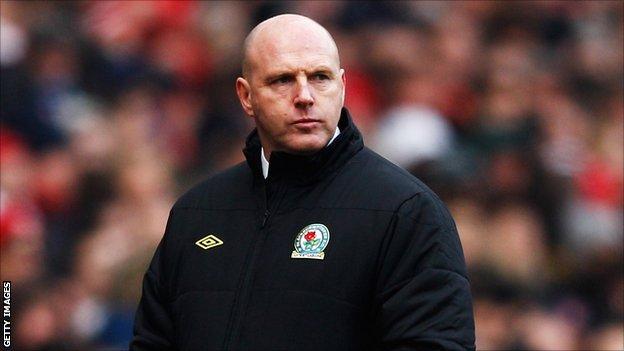 Steve Kean has said he has held "positive and constructive" talks with owners Venky's, amid speculation about his future as Blackburn Rovers manager.

It is understood Kean's position is still under review, although he is expected to take charge of Saturday's Championship game at Charlton.

"We remain on course to get where we want to get at the end of the season, which is automatic promotion," he said.

"It's been constructive talks and it's been a great week."

When asked by BBC Radio Lancashire if he feared for his job at any point over the past few days, Kean added: "I only want to say that the talks were positive, and I'm the type of person that when I have confidential talks with the owners, I'll make sure the content remains totally private.

"If anybody else wants to talk about the content, that's their prerogative, but I'll always make sure that they remain private, and they were very constructive."

Captain Danny Murphy added: "It's a bit like getting up every morning and having your breakfast. There's always something to read.

"It's becoming so every day that it's not that important to talk about it.

"The stuff that's out of your hands you can't have an influence on. You can only try to perform on the pitch to the best of your ability.

"That's what the manager, the club and the fans want. We all want to play well, win games and get back to the Premier League."

It was reported that following a Blackburn's first league defeat of the campaign.

Rovers, who were relegated from the Premier League in May, had led the Championship before that loss and they remain third in the table behind Brighton and Huddersfield, having collected 14 points from their first seven games.

But home attendances are significantly down on last season - only 13,405 were present at the Middlesbrough game, around 9,000 fewer than their average gate in the top flight in 2011-12.

the club's next home match, against Wolves on 6 October, if Kean is still in charge of Rovers.

But the Scot, who turns 45 on Sunday, says his only focus is on making sure his side return to winning ways at Charlton.

"We're positive and we're preparing for the game in a manner that is positive and professional," said Kean. "It's been a good week."