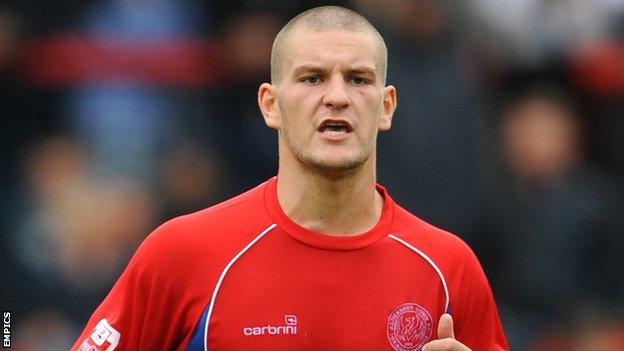 Defender Simon Ainge hopes his loan move to Luton will lead to a second chance of a full-time career as a professional footballer.

Ainge, 24, was working as a recruitment consultant while playing for Guiseley in the Blue Square Bet North.

"When you're doing a 40-hour week, it's hard work and you're sometimes going to games not in the right mindset.

"Now I can fully concentrate on football, I'm really looking forward to it," he told BBC Three Counties Radio.

The England C international was a professional during three years with Bradford City at the start of his career.

He eventually dropped out of the Football League to join Bradford Park Avenue in 2009 and moved on to Guiseley the following year.

Ainge hopes he can impress enough during his one-month spell at Kenilworth Road to convince Luton boss Paul Buckle to extend his loan or even make the move permanent.

"I've got ambitions that I want to earn a living out of football and this would be a great club to come and do it.

"I've always said if I get the opportunity to go back full-time, I'd love to have another crack at it and hopefully the gaffer has given me that here," he added.