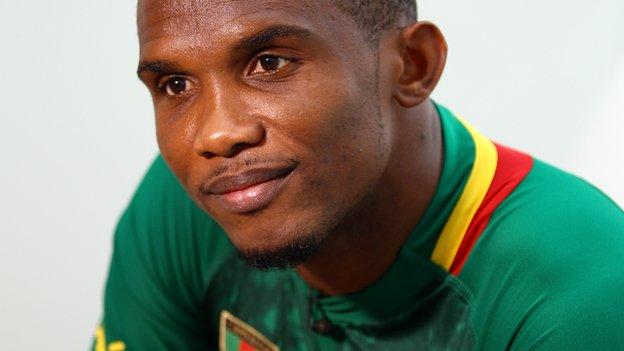 Cameroon striker Samuel Eto'o has announced he has ended his self-imposed international exile.

But the 31-year-old has been persuaded by Cameroon's government to return.

"On the request of the highest authority of the Republic, I make myself available to the Indomitable Lions," Eto'o said on his website.

"I am encouraged by my desire to serve my country with the same faith, ardour and determination of 15 years ago."

"I was received these past days by the state authorities to discuss the present situation of football in Cameroon, and specifically the national team," added Eto'o, who has won 109 caps for Cameroon and scored 53 goals.

"I am convinced that together, putting aside other interests for the country, we are capable, with God's assistance, of giving Cameroon football the panache, and shine of old."

Eto'o first task will be to help the Indomitable Lions try to overturn their two-goal deficit when they host Cape Verde on 14 October.

At stake is a place at next year's tournament in South Africa, and Cameroon are desperate to qualify having missed out on the 2012 finals.