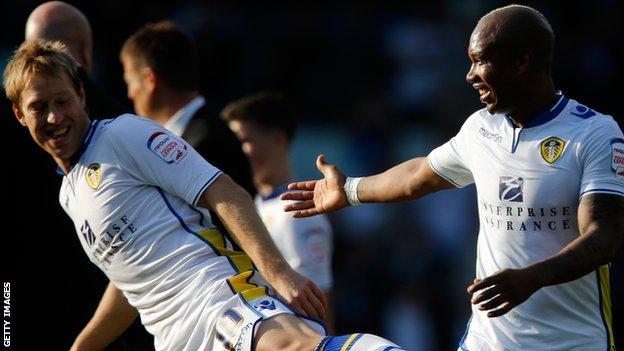 Luciano Becchio's first-half penalty was enough to give Leeds a narrow win over Yorkshire rivals Barnsley.

The goal came against the run of play with the Tykes dominating the opening exchanges, as they looked to continue a six-match unbeaten run against United.

Marlon Harewood came closest to equalising, forcing a stunning save from Paddy Kenny but Leeds held on.

Neil Warnock's men secured their fourth victory in five games, as they look to continue their push for a play-off spot, but currently find themselves edged out on goal difference by local adversaries Huddersfield.

But Keith Hill's side would have been confident of leaving Elland Road with at least a point before kick-off having not lost to their opponents since 1998.

And they made the brighter start to the game, with David Perkins and Jacob Mellis coming close with their efforts.

Leeds' El-Hadji Diouf swung in a superb cross which was met by Becchio's head, but the Argentine could not find the target.

The controversial, game-defining moment came on the stroke of half-time with the referee judging a foul on Peltier to be in the area. The furious Barnsley protests were waved away and Becchio converted the penalty with a cheeky chip down the middle of the goal.

Former Nottingham Forest man Harewood thought he had restored parity with his strike, but Kenny saved superbly at full stretch to deny him as Leeds ended their miserable run against Barnsley.

"It is fair to say the referee didn't have one of his better games. Both managers agree on that.

"I am going to do an Arsene Wenger and say nothing about the penalty because I haven't seen it yet.

"I can't stand watching penalties, but I'm told Luciano just clipped it down the middle. He told our coach Ronnie Jepson 'it's a good job it went in or the gaffer would have killed me'.

"That's five games unbeaten and what my lads have done in the last two or three weeks has been phenomenal. It has exceeded expectations."

"[The referee] has got a major decision seriously wrong. That is unexplainable. When referees don't apologise when they have made a mistake it becomes a little bit disrespectful at times.

"I just wonder if the assessor has told the referee a major decision has decided the outcome of the game and he has got it wrong - not just wrong, seriously wrong. It wasn't marginal.

"Whose job will it affect? Whose opinion will it affect when they look at that league table and won't consider the performance? It will affect a lot of Barnsley supporters who couldn't make it today."