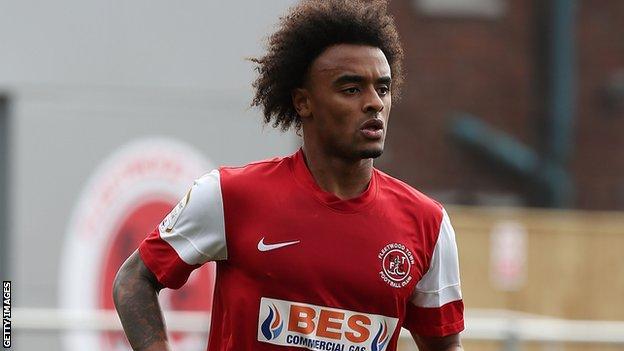 Junior Brown scored in injury-time to earn Fleetwood a point at Cheltenham.

The visitors took the lead when Brown's cross was punched into the air and David Ball scrambled over the line.

Cheltenham came to life in the second half and substitute Jeff Goulding toe-poked home an equaliser before Sido Jombati headed in Billy Jones' corner.

Brown struck in the 92nd minute to deny the hosts the win and Robins captain Alan Bennett was then sent off after clashing with Jamie McGuire.

The result kept Fleetwood third in League Two while Cheltenham slipped down one place to sixth.

"Alan Bennett got sent off for pushing the lad in the chest. It was totally unacceptable and unprofessional and I miss my captain for the next three games.

"He said the lad was in his face because they scored. So what? I am absolutely angry.

"Unfortunately we didn't hang on for the points we deserve, but we take many positives and our unbeaten run carries on.

"We turned it around which is something we don't always look like doing, so credit to the boys for that. We showed our character and fighting spirit."

"It was all about the 18-yard boxes. There wasn't an awful lot of football between them.

"We knew what to expect from Cheltenham. They have massive players all over the pitch, so we're disappointed to have conceded two goals from set-plays.

"In the end we're pleased to have picked up a point. That's seven points from three games in a pretty short space of time, and the players have done well."