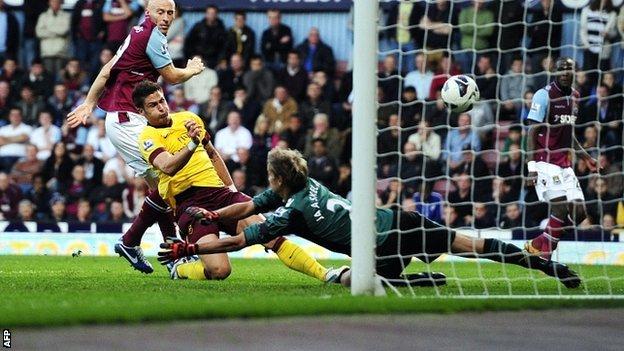 Olivier Giroud scored his first Premier League goal for Arsenal as the Gunners came from behind to beat West Ham.

West Ham took the lead against the run of play when Mohamed Diame beat Vito Mannone with a curling shot.

Giroud equalised before the break when he poked in Lukas Podolski's cross at the near post.

Kevin Nolan missed two chances for the hosts and was made to pay when Theo Walcott came off the bench to make it 2-1 with Santi Cazorla hitting a third.

Walcott, who replaced the disappointing Gervinho, helped the Gunners take advantage in the last half hour as West Ham tired.

But having been on top for large parts of the game, it was no more than Arsene Wenger's team deserved as they extended their unbeaten record against the Hammers to nine games and moved to fifth in the Premier League table.

Sam Allardyce's side had to defend stoutly throughout the game but they came up against a midfield again run by the impressive Cazorla.

And their disappointment in losing their first Premier League home game of the season was compounded by an injury to forward Ricardo Vaz Te, who went off with a suspected dislocated shoulder.

Walcott and Cazorla's late goals in the space of six minutes gave the scoreline added gloss as Andy Carroll caused concern in the visitors' defence on the striker's first start since suffering a hamstring injury.

But the result was the perfect response to the Gunners' defeat by Chelsea last weekend and means that is the only league defeat of their season so far.

Carroll's value was also underlined when he spent much of the first 20 minutes bolstering the Hammers defence as Arsenal wasted a number of promising opportunities.

Giroud almost scored in the first two minutes when Jussi Jaaskelainen tipped his shot round the post and Carroll blocked the French striker's goal-bound effort later in the first half.

So when West Ham's goal came on 21 minutes it was something of a surprise. Diame was fed by George McCartney down the left and the Senegalese player skipped past Aaron Ramsey before curling a delightful finish into the far corner for his first Hammers goal.

Referee Phil Dowd booked the midfielder for his celebration and perhaps Diame was fortunate to stay on the field soon after when he clattered Mikel Arteta.

Then, just as Carroll began to become more influential in the attacking half, Diame had his pocket picked in midfield leading to the equaliser.

The ball was swept to Podolski on the left and Giroud burst to the near post to tuck in the German's cross for a true poacher's goal.

Having got themselves back on level terms, Arsenal took time to warm to a similarly attacking theme as the first period.

By that stage, Carroll had almost made it 2-1 but his header from a long diagonal ball was just wide with Mannone beaten to the delivery, while Nolan wasted a great chance when clean through.

As Arsenal began to assert their authority on the game, Walcott latched onto Giroud's through ball just 16 minutes after coming on to score his fourth goal of the season with a precise near-post shot.

Another chance fell to Nolan, but he fired over from the edge of the penalty box, and that miss proved costly once Cazorla smashed in Arsenal's third from 20 yards to cap a superb individual performance.

The only worry for Arsenal was with left-back Kieran Gibbs, who left the field in the second half with what Wenger described afterwards as a "thigh problem".