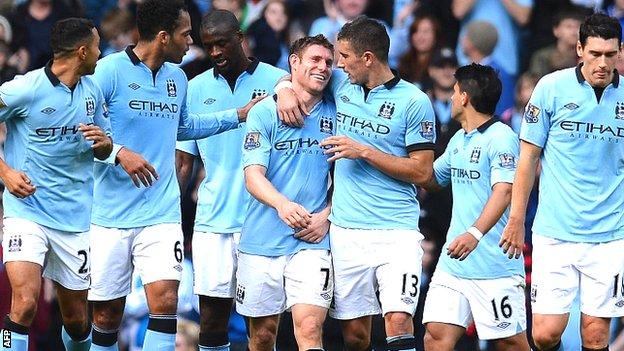 Manchester City returned to form with a deserved victory over Sunderland thanks to goals from Aleksandar Kolarov, Sergio Aguero and James Milner.

The Premier League champions had won just one of their previous six matches in all competitions but were fine value for this victory.

Kolarov's free-kick gave City an early lead and substitute Aguero made it two with a neat finish after half-time.

Milner's set-piece was deflected in by Craig Gardner to seal the points.

Roberto Mancini's men had numerous chances to improve the scoreline but they will be delighted with the result.

It was City's first clean sheet of the season and moves them up to second in the table, four points behind leaders Chelsea.

Mancini admitted the quick turnaround from was "a problem".

But despite making seven changes to the line-up, his side had little trouble inflicting a first loss of the season on Sunderland.

One of those changes saw Carlos Tevez come into the side and it was a menacing run from him that led to the opener.

The Argentine surged down the left only for Carlos Cuellar to arrive with a reckless challenge.

Left-back Kolarov stepped up to curl an unstoppable free-kick past Simon Mignolet at his near post - the in-form Serb's fourth goal in five games for club and country.

It was the first time Sunderland had gone a goal behind this season and they briefly pressed forward in an attempt to hit back.

Stephane Sessegnon volleyed over but the visitors lacked creativity and Steven Fletcher found himself isolated up front.

City were dominating possession and Mignolet denied Pablo Zabaleta before Tevez screwed wide from the follow-up.

The one team to come away from Etihad Stadium last season unbeaten were Sunderland - they - and it was inevitable they would improve after half-time.

Sebastian Larsson began to find more space and his floated cross was volleyed towards goal by Fletcher, only for the excellent Micah Richards to arrive with a crucial block.

But as Sunderland improved, so did City, and the Black Cats' greater ambition made for a more open and expansive encounter.

Toure saw a powerful drive tipped over the bar after David Silva's superb flick and Danny Rose cleared a shot off the line from Richards, who was making his first appearance of the campaign.

After Balotelli failed to connect with a low cross by Kolarov, the Italian was replaced by Aguero and he made an immediate impact.

Kolarov produced another inviting centre from the left and Aguero met it with a superb first-time finish past Mignolet.

Milner's industry was rewarded when his free-kick skimmed off Gardner's head and past Mignolet, who foiled Aguero late on but could not prevent City going into the international break on a high.