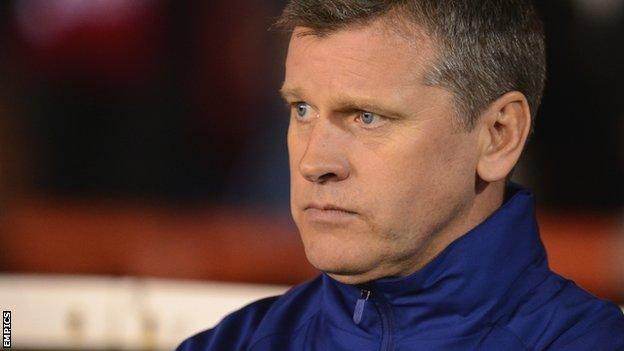 The midfielder struck with 12 minutes remaining when he found the net from 25 yards after a good first touch.

Rovers almost got a point but Colin Kazim-Richards headed off target from close range from Fabio Nunes' cross.

The defeat for Blackburn hindered interim boss Eric Black's chances of getting the job permanently as he has not won a game in his three in charge.

A crowd of 17,034 watched this match - Blackburn's previous highest attendance this season was 13,935 against Leicester on 25 August

A crowd of 17,034 turned out at Ewood Park, the highest of the season, for Blackburn's first game at home since Steve Kean's departure.

But it was the visitors who started the brightest, Sako forcing Blackburn goalkeeper Paul Robinson into an early save with a fierce strike.

Rovers' claims for a penalty when Jordan Rhodes went down under a challenge from Richard Stearman were waved away by referee Nigel Miller before Sylvan Ebanks-Blake hit the post for Stale Solbakken's side.

Rhodes had the hosts' best chance of the opening half when he forced Carl Ikeme into a reaction save, before Anthony Forde curled wide after the break for Wolves.

Then with 12 minutes remaining, the ball came out to Sako from a corner. His first touch took him into space before he beat Robinson with a fine effort.

Kazim-Richards should have done better moments later when Nunes' ball caused confusion between Ikeme and Wolves centre-back Christophe Berra but he squandered the chance.

Blackburn are now without a win in four games, while Wolves move to third.

"That's two weeks in a row. I'm not saying we'd have gone on to win the game but they're crucial decisions and they're so blatant. That's two ridiculous claims we have had.

"How they can decide Jordan (Rhodes) has fallen by his own means is beyond me. Their boy falls over as well so contact must have been made.

"I'm not deluding myself; I don't think we did enough to win the game but we certainly did enough not to lose it."

"I think we were rock solid today taking into consideration how this week has been for us, taking into account injuries for Slawomir Peszko, Razak Boukari and Kevin Doyle, who was injured in training yesterday.

"What I'm proud of is the players who played in not the most familiar roles played very well. I think the confidence in the team in the first half was very good. Some of the youngsters also got game time today."