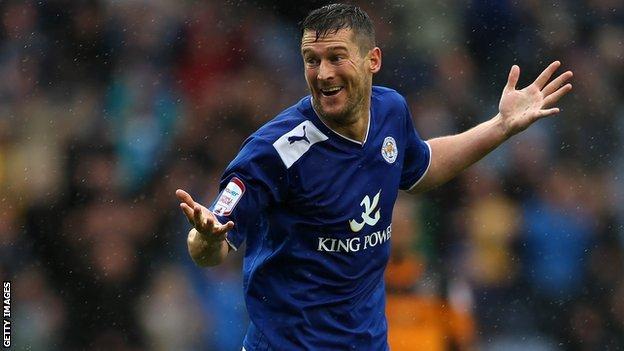 Leicester City are second in the Championship after a confident performance against Bristol City earned them their fifth straight league win.

David Nugent opened the scoring after being put through by Jamie Vardy, slotting past Tom Heaton.

Bristol City went in search of an equaliser with Liam Fontaine missing a good opportunity to draw level.

Robins defender Richard Foster then inadvertently headed Andy King's cross into the back of his own net.

Nigel Pearson's men maintained their winning streak in the Championship and have now triumphed in all five games at the King Power Stadium.

They could have been ahead, though. In the first minute, Jody Morris met Sam Baldock's cross, but the former Chelsea man's header was straight at Kasper Schmeichel.

Nugent headed over from six yards on 28 minutes, but made amends 60 seconds later, racing onto Vardy's through ball before slotting past Heaton for his fifth goal of the season.

Morris was involved again after the break, providing for Fontaine, but the defender was unable to get his header on target.

And Leicester sealed the win with an own goal from Foster, banishing last season's memory of a double league loss against their opponents.

"Obviously it is very pleasing to be in the position we are in but we have to keep things in perspective.

"When the season started we knew we had a very tough first 10 games, and we have had to work very hard to get into this situation. Our staff and players can take great credit for that.

"It was not one of our most sparkling displays but we had some good spells and created chances. We have had a tough run of games and a few of the players ran out of steam. I'd say it was an efficient performance as much as anything."

"We lost to a better team and a team that will be in the shake-up for promotion at the end of the season. They look to me to be a team with the pedigree to be a Premier League side.

"They have got good pace, good invention, goals, good legs and strength at the back as well. It was always going to be a big ask for us to come here and get something.

"For that to happen we needed to defend better than we did for the two goals. And we had to have more of the game in the last third."