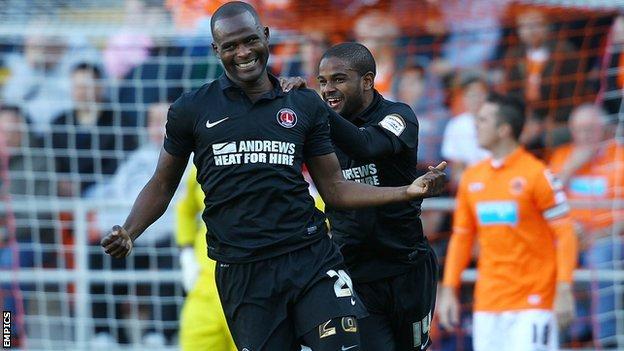 Blackpool dropped out of the Championship play-off places as they lost at home against Charlton - their third defeat in four matches.

The Addicks nearly took the lead in the first half but Ricardo Fuller's header, from Salim Kerkar's low cross, hit the underside of the bar and bounced clear.

Charlton went ahead after the break when Leon Cort nodded in following a Dale Stephens left-wing corner.

Chris Solly sealed the victory for the visitors with a powerful 20-yard shot.

That goal was his first since August 2010 and only his second in an 84-game career.

Blackpool had opportunities in the first half but Gary Taylor-Fletcher saw an attempted chip from 40 yards land on the roof of Ben Hamer's goal, before Matt Phillips forced a save from the Charlton goalkeeper.

But the visitors created chances of their own and Fuller also had an effort tipped around the post by home goalkeeper Matt Gilks.

Centre-half Cort scored his second goal of the season to put the visitors in front and Solly doubled Charlton's advantage, firing home after a Stephens shot had deflected into his path.

Blackpool substitute Kevin Phillips volleyed wide late on as the visitors claimed their second successive away win, while The Tangerines, who began the day fourth, dropped down to eighth in the table.

"I'm very bitterly disappointed. Our Achilles heel has been balls into the box and it happened again. I'm fuming, absolutely fuming.

"We have to be much tougher to score against and more resilient."

"I'm very, very pleased with our response from the loss on Tuesday [at home to Watford].

"It was a real accomplished performance from the players.

"In this league if you nudge in front you've got a real chance to win games.

"We've been hurt in recent games and I've been asking my side to keep a clean sheet because we've got goals in us."