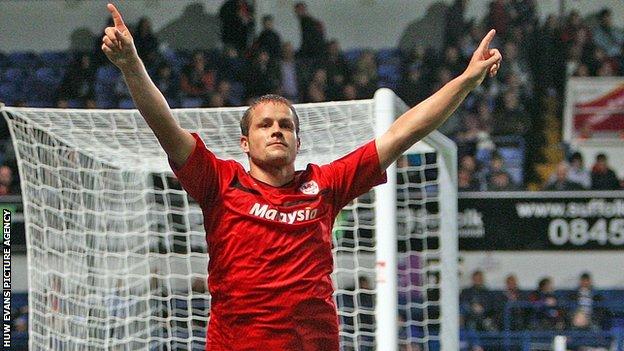 Heidar Helguson kept Cardiff City top of the Championship as the visitors came from behind at Ipswich Town.

Ipswich led through a controversial DJ Campbell goal, as replays showed the striker used his hand to prod home.

Then with two minutes left Ipswich's defensive frailities again came to the fore as Helguson stole in at the back post to head in Andrew Taylor's cross.

The result leaves Ipswich stuck firmly in the relegation places, just a point above bottom-placed Peterborough.

Ipswich boss Paul Jewell chose to leave out former Cardiff striker Michael Chopra, who this week was one of nine people charged in connection with race-fixing by the British Horseracing Authority.

But at least Jewell had Campbell available, after the forward arrived on a three-month loan from Queen's Park Rangers.

The former Blackpool striker seemed to breathe new life into Ipswich's stuttering attack and the Tractor Boys largely bossed the first half.

Campbell saw an early effort drift over the Cardiff crossbar, while Jay Emmanuel-Thomas - a former loanee at Cardiff - brought a superb full-stretch save out of Bluebirds keeper David Marshall with a swerving, dipping shot.

Cardiff's attacks were more sporadic and when Ipswich took the lead on the stroke of half-time the lead was deserved, although the method left a sour taste in Cardiff mouths.

Lee Martin spun away from Mark Hudson on the left touchline and delivered a searching cross between the Cardiff centre-backs.

Campbell seemed sure to score but Marshall's charge off his line seemed to distract the Ipswich new boy, with replays showing the ball missed the striker's head and went in off his hand instead.

Referee Eddie Ilderton and his assistants missed the infringement and allowed the goal to stand.

An aggrieved Cardiff emerged for the second half and a rasping drive from Peter Whittingham that just cleared the bar signalled a renewed vigour from Malky Mackay's men.

Campbell received a standing ovation when he was brought off just before the hour mark to be replaced by Jason Scotland, but the change failed to stifle Cardiff's momentum and they levelled on 63 minutes.

Substitute Conway looked to have wasted his crossing opportunity on the left as he floated his delivery too close to Loach, but the Ipswich man was unable to cleanly gather and spilled the ball into the path of Helguson, who had the easiest of tap-ins.

Taylor stung the fingers of Loach with a drilled effort from the left of the area, before Rudy Gestede's header deflected away for a Cardiff corner.

Cardiff then grabbed all the points when Taylor's high cross into the area from the left caused more hesitation in the Ipswich defence.

Aaron Cresswell left the ball thinking Loach was coming out to claim and Helguson leaped high at the far post to head home unchallenged.