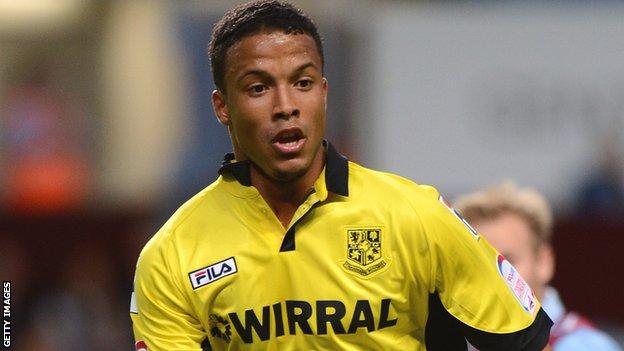 Tranmere maintained their four-point lead at the top of League One with victory over Notts County who suffered a second home defeat in a week.

First-half substitute Joe Thompson grabbed the only goal, heading in at the far post after great work by Abdulai Bell-Baggie.

Notts had plenty of possession but the visitors created the better chances.

Jake Cassidy spurned a great opening before the interval and Bell-Baggie could have had a second-half hat-trick.

But Rovers, who are now nine points clear of Notts and still four ahead of Stevenage in second place, did not need the security of a second goal.

Notts, who slip to seventh place, started encouragingly and enjoyed plenty of the ball on a glorious sunny day at Meadow Lane.

But for all their neat touches and nimble footwork in the middle of the park, they rarely threatened the visitors' goal.

A against fellow promotion rivals in six days illustrates why Notts manager Keith Curle is eager to bring in a new striker.

The Magpies' only noteworthy first-half efforts came when the ever-industrious Neal Bishop hopelessly miskicked from 12 yards after a fine run by new signing Jordan Stewart, and Jamal Campbell-Ryce fired a shot wide after cutting in from the right flank.

But by that time, the hosts were already trailing to a highly-disciplined Rovers, who played with all the confidence of a side who were four points clear at the top of the table heading into this fixture.

Thompson, an 18th-minute replacement for the injured Jean-Louis Akpa Akpro, was the scorer, rising at the far post to head in Bell-Baggie's deep right-wing cross.

Cassidy wasted a great one-on-one opportunity to double the lead, but could only shoot straight at the on-rushing Notts keeper Bartosz Bialkowski.

Notts introduced Lee Hughes in the second period but, despite adopting a more direct approach, still struggled to create chances.

Yoann Arquin failed to get a decent connection with a glancing header and Gary Liddle headed over from a corner.

But Tranmere should have been out of sight by the time they safely negotiated a nervy last five minutes.

And he teed up Cassidy who also drilled a low effort just wide of the right-hand post after a swift counter-attack.

Bialkowski also pulled off a fantastic stop from James Wallace.

Rovers, who could easily have had Ash Taylor sent off for a late lunge on the home keeper, held on and were able to celebrate in front of a noisy and delighted travelling away support of nearly 1,000.