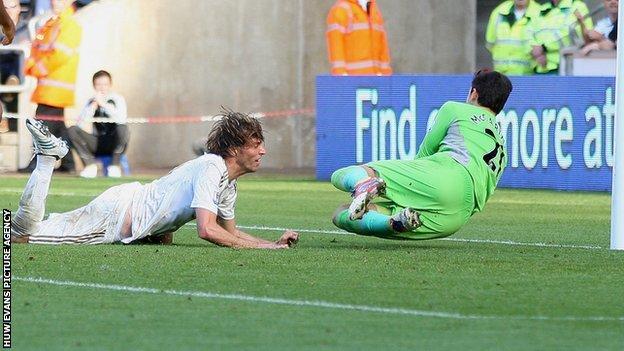 Wayne Routledge scored a stunning equaliser as Swansea stopped a run of three defeats and denied Reading their first Premier League win of the season.

A string of top-class saves from Alex McCarthy kept Swansea at bay after Pavel Pogrebnyak squeezed his shot under Michel Vorm to put Reading ahead.

"Honours even at the Liberty Stadium. Michael Laudrup's winless run continues but it's a point having been two goals down. Wayne Routledge in the end was the one to get the point with the equaliser after Reading had led 2-0. They still await their first Premier League victory but it's a third point for Brian McDermott's team in an entertaining affair."

The excellent Routledge then hit a pile-driver to claim a draw.

The last time the two sides met was in the 2011 Championship play-off final, when Swansea crushed Reading's Premier League hopes with a thrilling 4-2 win.

Brian McDermott's side had to wait another season to join their conquerors in the top flight, but Saturday's performance will have given further encouragement despite the disappointment of watching a first win slip from their grasp.

Swansea started brightly and Ashley Williams, confirmed this week as the new Wales captain, worked himself space in the Reading six-yard box at a free-kick but could only put his header wide of McCarthy's left-hand post.

The home side continued to press and Reading goalkeeper McCarthy again had to be on his toes to tip Danny Graham's powerful header over the crossbar, after Routledge whipped in a left-wing cross.

Routledge was again involved soon after as the winger took Michu's pin-point diagonal through ball in his stride but fired straight at McCarthy.

While it was Swansea's attacking midfielders who were catching the eye, the fulcrum of their neat play was Leon Britton - playing his 400th game for the south Wales club through all four divisions and slotting into the holding role vacated by Joe Allen's departure to Liverpool.

Reading were struggling to get to grips with the game and only the imposing figure of Pogrebnyak offered any relief for the hard-pressed Royals, as the striker used his strength to hold the ball up.

The Russian's appetite for hard-work was rewarded as he gave Reading the lead completely against the run of play, taking Jobi McAnuff's pass down the left channel and watching his shot squirt under Vorm and into the Swansea goal.

The set-back left the usually rock-solid Dutch keeper scratching his head and visibly took the wind out of the sails of a Swansea side who had not found the back of the net in their three previous Premier League games, all defeats.

Reading then delivered a hammer blow a minute before half-time as Hunt doubled the visitors' lead with their second shot on target.

Swansea's defence did well to close down a series of snap-shots, but the last from McAnuff spun wickedly off Angel Rangel's foot and dropped perfectly for Hunt who converted with a crisp right-foot volley across Vorm.

Luke Moore replaced Graham for Swansea at the start of the second half and almost made an immediate impact as he surged through the middle, only for McCarthy to pull off a fine save with his outstretched right boot.

Moments later McCarthy again came to Reading's rescue as the goalkeeper clawed Moore's header out of the air and just diverted the ball onto a post.

McCarthy's superb afternoon continued as the keeper instinctively stuck out a hand to parry Ki Sung-Yeung's deflected shot, then saved low to his right to keep out Williams' header from the resulting corner.

Reading's resistance was finally broken 17 minutes from time as Routledge's cross took a slight deflection and Michu flew in at the back post to send a diving header into the net.

Swansea surged foward and within seven minutes Routledge got the goal his efforts deserved, exchanging passes with Moore before smashing home an unstoppable equaliser.

Pablo Hernandez, on for Nathan Dyer, almost gives Swansea an improbable victory, chipping over the bar amid claims of handball against Nicky Shorey.

But Reading were not finished either and Williams had to be alert to head Jem Karacan's looping header off the line after Vorm failed to get enough distance with a clearing punch.

Swansea manager Michael Laudrup: "I think when you're 2-0 down and come back you should be pleased and then you add we had three consecutive defeats.

"It is important that we stopped the losses. That was important, you can say one point from four is quite poor but we are still five clear of the bottom [three].

"These are the games that show if your team has character and I think we showed that today."

Reading manager Brian McDermott: "I don't look at it like that [waiting for the win to come], I just look at the performances.

"The wins will come with the performances, our belief and confidence is absolutely fine.

"We won the Championship last year, they know how to win games and they will do in this league."