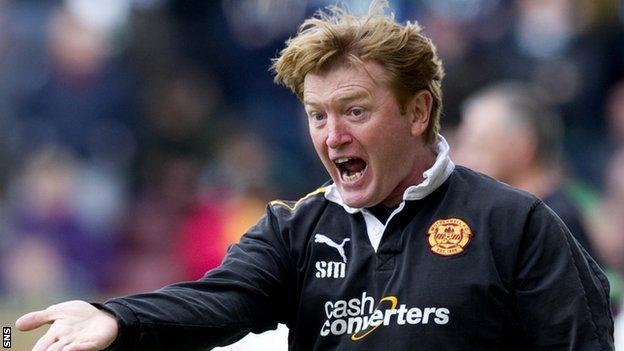 Manager Stuart McCall had no complaints about his Motherwell team's performance after deposed them as league leaders.

"We were beaten by a better side on the day," said McCall after a Gary Hooper strike and an Adam Cummins own-goal sealed the points for the visitors.

If you come up against a side that are better than you and they play well, you can only do your best

"It could have been worse, getting a man sent off with 30 minutes to go."

McCall told BBC Scotland that he had "no problem" with Iain Brines' decision to show a red card to Cummins for a blatant foul on Kris Commons as he surged into the box.

"It's not what we'll do against Celtic that will count," added the Fir Park boss on his team's Scottish Premier League campaign.

"Obviously, we want to beat every side but you've got to be realistic.

"With the side they've got, when they play at their best, which they certainly were today, nobody else will have a prayer to match them.

"Celtic were outstanding and that's what happens when they are good.

"The one thing from us is that we stuck at it."

McCall praised the workrate of his players, with his only criticism the positioning of his defenders at the Celtic goals.

"We wanted to press to knock Celtic out their stride and for a certain part it worked," he added.

"It's a great learning curve for our young centre-backs and full-backs.

"We got caught out for both goals by coming too far up the park.

"But there will be no doom and gloom about the place.

"If you come up against a side that are better than you and they play well, you can only do your best.

"We've got to go to Dundee United and be somewhere near our best but the opposition today were too good."