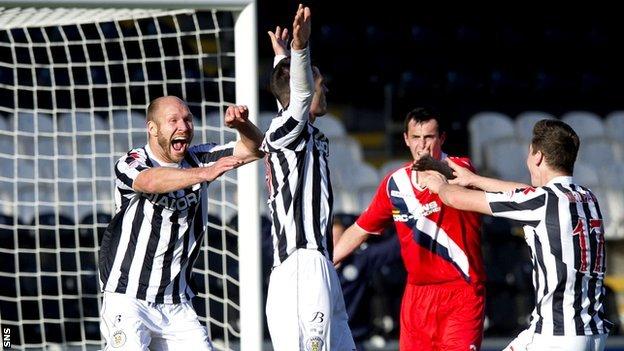 The Paisley side took all three points after Steven Thompson's overhead kick edged a nine-goal thriller which had see-sawed throughout the match.

And Lennon, who described himself as "drained" after the match, paid tribute to the goal which won the game.

"It was a special goal to win any game of football."

"I thought the two subs that came on, it was written for them, that the two of them went on and scored two wonderful goals."

However, Lennon was critical of a first-half performance that saw the visitors dominate, and voiced frustration at his side's inconsistency.

"I want to forget about the first half, there were so many unpleasing things that I wouldn't know where to start," he added.

"You look at that third goal that we let them back in, that is us through and through.

"You play lovely football, you've got the fans at the edge of their seat and then, five seconds later, it's in the back of your net.

"That is us, and we will continually do that. That's what that performance was all about.

"It's a very, very difficult game to digest.

"I'm done in, but, believe it or not, win lose or draw, Saturday night's always my best sleep."