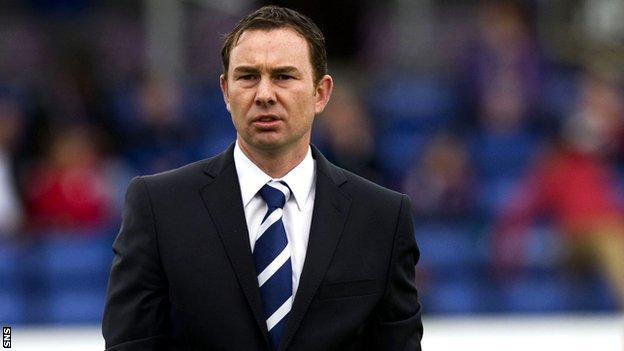 Ross County manager Derek Adams expressed his frustration after watching his side throw away points for the second week in succession.

by a single goal after Steven Thompson's late winner.

I am bitterly disappointed and don't think we dealt with the presence of Thompson and Parkin.

"We have come away and scored four goals, so to still lose the game is very hard to take," said Adams.

"I thought we dominated the first half and went in at 2-1, but then, second half, we just haven't done well enough defensively.

"I mean, we've scored four goals away from home, but we've lost five, and we could have stopped all five."

Adams, praised St Mirren's comeback, but was unhappy his side had not closed the defensive door on them.

"From my point of view, there shouldn't have been a way back for them.

"But, that's the nature of football."

And Adams conceded his side had failed to deal with different tactics from the Paisley side.

"I am bitterly disappointed and don't think we dealt with the presence of [Steven] Thompson and [Sam] Parkin," he said.

"St Mirren are renowned for being a passing team, but obviously today they were a bit more 'route one'."

However, the County manager is taking a surprising positive from conceding five goals.

"We haven't done that since Hamilton in the First Division," he added.

"But we all know what happened after that, though. We went 40 games unbeaten, so maybe it's an omen."