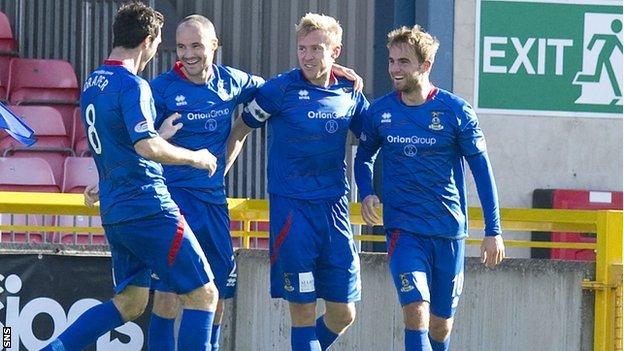 Terry Butcher heaped praise on his Inverness players following their 4-0 destruction of disappointing Dundee United at the Caledonian Stadium.

"I am pleased for the players because they are the ones who have taken a lot of stick this year," said the manager.

"There are people writing them off but they answered everybody back in the best way with that performance today.

"It was a wonderful game of football. We passed the ball well. It was easily our best performance of the season."

Richie Foran's first-half double was followed after the interval by goals from Andrew Shinnie and on-loan Arsenal forward Philip Roberts.

The lack of league victories has attracted criticism in some quarters, despite only losing matches to Motherwell and Celtic this season and progressing into the last eight of the Scottish Communities League Cup.

"They are all heroes today and they thoroughly deserve the praise they are going to get," Butcher told BBC Scotland.

"We are on a four-match unbeaten run now. In eight matches in the SPL this season we are undefeated in six, so that's pretty good.

"Dundee United were the better team for the first 10 minutes. It was like a boxing match early on, with the boys sizing up the opponents.

"And having sized them up they thought they could do well here today.

"They answered the questions themselves and came up with good solutions. It is totally their victory, how they prepared, how they played and how they managed to get their heads round this match."