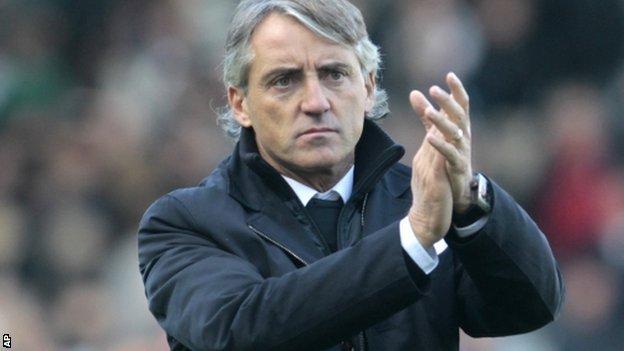 Manchester City boss Roberto Mancini feels the penalty his side conceded in their win at Fulham was the latest key decision to go against them recently.

"It was out of the box and it was no foul, no penalty," Mancini said.

"There were a lot of mistakes in the past four games. We accept this, but we're not happy. We can do nothing, only continue to play."

Sergio Aguero equalised before half-time and Edin Dzeko came off the bench to score an 87th-minute winner for Mancini's men, who went into the game without a victory in four games in all competitions.

City had to battle to break down a determined Fulham defence and Mancini felt their job at Craven Cottage was made more even harder by Fulham's early spot-kick.

"Against Fulham here it is always difficult," the City boss said. "They are a good team, have good players, a good manager.

"This pitch is always tough for us but the problem is we were 1-0 down and I don't know why because the penalty was not a penalty.

Fulham's failure - How the Cottagers have fared against Man City

Fulham have won just one of their 11 Premier League home games against Man City (W1 D5 L5). Only against Chelsea (W1 D5 L5) do Fulham have a home record as bad.

"Sometimes it is a penalty but the referee is there to take a decision. Sometimes he does well, sometimes he can do bad.

"If we go to watch all our last three games, against Stoke it was handball (for Peter Crouch's goal). I don't know why the referee that was behind didn't give it. Against Arsenal there was one penalty [we should have been awarded].

"We were 1-0 down and Fulham didn't shoot on goal for the first 20 minutes.

"That was a problem but I am happy because the players continued to play well, kept calm and we had a lot of chances."