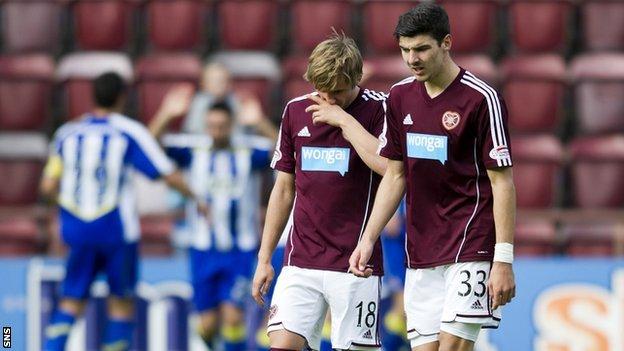 Hearts manager John McGlynn challenged his side to develop a ruthless streak after .

"It's just that instinct in front of goal to get ourselves in front," McGlynn told BBC Scotland.

"The first goal is so, so important. If we get the first goal, we grow in confidence [and] we probably go and win the game."

McGlynn's side had chances to go in front before Sheridan's 32nd-minute opener, which came while Hearts defender Ryan McGowan was off the park replacing a contact lens.

"Unfortunately, it's the same old story," said McGlynn. "Another game where we've dominated, had loads and loads of corner kicks, free-kicks, goal attempts and yet we come away with a 3-1 defeat.

"It's been the pattern for a number of games, particularly here [at Tynecastle].

"We were well on top in the game. Arvydas [Novikovas] has got a great chance when the ball's cut back to him round about the penalty spot. The whole goal to shoot at and he puts it over the bar.

"We should be able to play with 10 men for a couple of minutes without losing a goal. We couldn't survive for two minutes.

"We lose a goal, which is poor from our point of view. We let the cross get in and Sheridan got off the markers and gets a header in."

The Hearts boss felt there was a suspicion of offside about Sheridan's second and described the loss of the third as "soft".

"These are big, big decisions," said McGlynn of the second goal.

"It's maybe the changing point in the game."