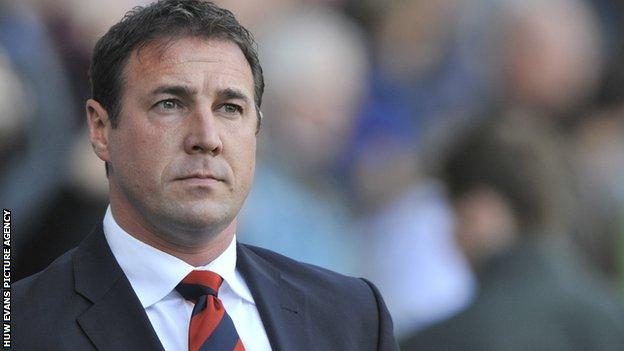 Manager Malky Mackay was full of praise for his defenders following Cardiff's win over Blackpool in the Championship.

Mackay was pleased with his side's response after they had thrown a two-goal lead in the 3-2 defeat at Crystal Palace.

"Our defence has been working so hard and it's good to get another one [clean sheet], especially here," Mackay said.

"Now and again the forwards get accolades because of goal threats.

"But I thought my left-back especially, Andrew Taylor, was outstanding.

"But I can't really single him out because the other boys at the back and our goalkeeper were good as a well."

The win maintained Cardiff's 100% home league record and saw Mackay's side move up to second in the table.

Connolly opened the scoring with his first Cardiff goal from close range in the 17th minute.

The summer signing from QPR sealed the win by heading home a Craig Bellamy corner after Peter Whittingham's free-kick had made it 2-0.

"[I'm] delighted the performance and the result equalled each other," Mackay said.

"It's one of those performances where we keep a clean sheet, score three goals, have other chances and are playing against a very good team.

"Our decision making was good all over the pitch and all I think we got stronger as the game went on. They were outstanding to a man today.

Cardiff host Birmingham City at home on Tuesday and travel to struggling Ipswich next Saturday before the international break.

Mackay is pleased with Cardiff's current position in the Championship but keen to emphasise his side are only eight games into the campaign.

"It's a long season and there's a lot of games to come and it's very early on," Mackay said.

"We will go into every game knowing this is a long hard season, knowing consistency plays a key role, knowing injury and suspension plays another key role.

"If you work hard, have talent and a little bit of luck then that's when you can do well.

"Hard work is something that's ingrained in myself and my staff and been ingrained in these players in the last year since I've been here and it won't change."