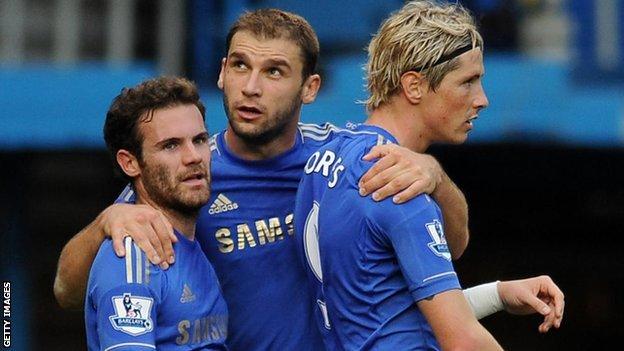 Chelsea put their off-field troubles aside as they emphatically beat struggling Norwich to continue to set the Premier League pace.

John Terry and Ashley Cole started for the home side but they went behind when Grant Holt drove in a 15-yard shot.

Chelsea hit back with a Fernando Torres header and Frank Lampard drilled in an 18-yard shot to extend the Blues lead.

Juan Mata set up Eden Hazard to slot in a third before Branislav Ivanovic powered in Chelsea's fourth.

The playmaking trio of Mata, Hazard and Oscar buzzed around with an incisiveness and invention that Norwich could not handle with the former particularly prominent.

Mata has four goals and five assists in the last five games and the stylish Spaniard was the main orchestrator as his side secured a sixth top-flight win in seven.

Norwich were left still searching for a first league victory of the season and manager Chris Hughton will be concerned at the leaking of 17 goals so far this campaign.

The victory for Chelsea will also be a relief for the Stamford Bridge side after the previous day's troubles.

The club had first learned of the Football Association's ruling that John Terry's evidence was "improbable, implausible and contrived" in the hearing over whether the defender racially abused QPR's Anton Ferdinand.

A tweet from Blues left-back Cole criticising the FA over comments about his role in the case caused more turmoil.

"A turbulent time at Chelsea but they were worth winners against Norwich as they won with room to spare. They stay firmly at the top of the Premier League going into the international break."

Both players were selected to play by boss Roberto Di Matteo but, after Torres missed an early chance, they failed to stop the visitors taking the lead.

Wes Hoolahan chipped a cross to the far post where Leon Barnett nodded the ball down for Holt to drive in a shot from just inside the area for his second league goal of the season.

The lead did not last long as Ivanovic crossed for Torres to head in from eight yards as the Canaries defence stood and watched.

Norwich have let in five goals twice already this season and, despite playing with a five-man midfield to be more defensively stable, they could not stop Chelsea, playing with vibrancy and verve, surging into a two-goal advantage.

An acrobatic Torres shot was blocked by Russell Martin but the effort was only cleared to Lampard, who thumped in a shot from the edge of the area.

Soon afterwards, the exemplary Mata ran unchallenged for half of the pitch before sliding through a pass which Hazard coolly tucked past keeper John Ruddy.

Norwich were playing on the counter-attack and had they had more of a cutting edge in the final third they might have caused Chelsea more concern.

Holt headed just wide from a Hoolahan cross in a promising chance for the visitors.

But Chelsea were in no mood to allow any sort of comeback and the manner with which they stroked the ball about with style and panache after their summer upheavals is a credit to the job Di Matteo is doing.

Ivanovic completed the victory with a drilled fourth, with Chelsea now holding a four-point lead at the Premier League summit.

"We're pleased that we're going into this international break at the top of the Premier League.

"We have so many more games to play but we're in a good position and have a lot of confidence.

"As long as we don't have many injuries, we'll keep chipping away and try to win as many games and points as we can.

"I still think Manchester City - if you look at their squad - and Manchester United will be up there."

"I was probably more annoyed and disappointed at half-time than I was at the end of the game because, after taking the lead, we certainly needed to be in the game for longer.

"When you come here, particularly with the quality that they have got - the offensive quality they've got now - you know it's going to be a tough ask. But, when you score so early, you need to stay in the game longer.

"At the moment, as a team, we're not defending well enough."