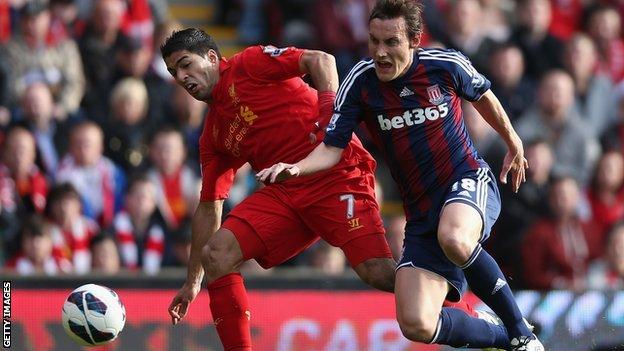 Liverpool remain without a home league win this season as they were held to a draw in a fractious game against Stoke.

Stoke's best chances came after the Reds gave the ball away with a Charlie Adam shot being saved and a Michael Kightly effort being tipped over.

The home side went close when Steven Gerrard had a strike palmed away, while Daniel Agger glanced a shot just wide.

Reds winger Raheem Sterling struck an effort against the woodwork as a resolute Stoke held on for a point.

Liverpool centre-back Martin Skrtel also went close late on when he poked a shot at goal from an acute angle only to see the strike hit the face of the post, with Luis Suarez just out of reach to turn the ball home.

Suarez was his side's main threat in the game and, although he has claimed to have legitimate penalty appeals turned down this season, he did not help his cause when he appeared to go to ground too easily after wriggling past Marc Wilson.

However, the Uruguayan was on the end of some harsh treatment by a Stoke side who picked up six bookings.

Suarez and centre-back Robert Huth were involved in regular tussles, which started when Huth appeared to stamp on the former early on in the game.

Ultimately, Liverpool's passing game was not refined or piercing enough to break through a disciplined and determined Potters side, who earned a draw but have gone 13 top-flight away games without a win.

The Reds, meanwhile, have won just four of their last 19 home league games and their problems at Anfield continued.

The home side struggled to find the rhythm and range of their passing game under the pressure and physical nature of Stoke's play as both sides wrestled for some sort of superiority early on.

Stoke's closing down forced the home side into two mistakes, although the visitors could not punish their hosts.

Nuri Sahin gave the ball away to midfielder Adam, who left Anfield to join Stoke in the summer, and his shot from just inside the area was saved by keeper Pepe Reina.

Reina was also culpable shortly afterwards as he tried to play the ball out of defence only to hand possession to Stoke.

Kightly almost capitalised when he tried to chip in but the backtracking Reina tipped over his bar to save his blushes.

Gerrard had a long range shot pushed wide by keeper Asmir Begovic, while Agger's glancing strike from a dinked Suso cross clipped the outside of the post.

Liverpool picked up the pace and showed more urgency after the break.

Begovic smothered and gathered a well-struck 22-yard strike by left-back Glen Johnson, who also latched on to a raking Gerrard pass before shooting high.

Agger pulled off a vital interception as Kightly tried to set up Adam for a simple finish but most of the pressure was being applied by the home side.

Suarez surged toward the Stoke goal and sidestepped the visitors' defence only to shoot the wrong side of the post before Sterling met an Agger cross with a shot which hit the outside of the upright.

Some theatrics from Suarez did not fool referee Lee Mason and, after Skrtel went close, he blew the whistle on a frustrating afternoon for Liverpool.