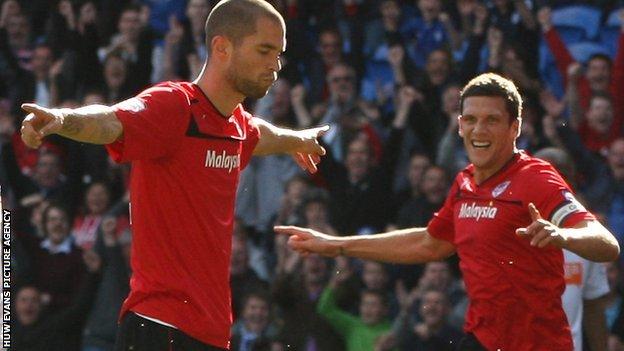 Defender Matthew Connolly says consistency and home form will be key in Cardiff's bid to gain promotion to the Premier League.

Summer signing Connolly, 25, opened his Cardiff account with two goals in the 3-0 win over Blackpool.

Cardiff's win maintained their 100% home record and saw them move up to second in the Championship.

"If you can get good home form and nick points away from home then that's a good formula," Connolly said.

"Since I've been here we've played three games here and won all three.

"It is a really hard place to come. I've come here and played. It's difficult [and] the fans are great."

Prior to the game against Blackpool manager Malky Mackay had called on fans to create a "fortress" at Cardiff City Stadium.

Connolly won promotion to the Premier League with previous club QPR in 2011 but says any talk of promotion for Cardiff is premature despite their lofty position in the Championship.

"The aim is to go up but I don't think we can take much [notice] of the table right now," he added.

"If you look at Reading last season after six games they were near the bottom of the league and went on an unbelievable run. I think the league will take shape again in six weeks."

Cardiff's victory over Blackpool came on the back of a 3-2 defeat at Crystal Palace, where Malky Mackay's side conceded a two goal lead.

"In football you have to learn from things," Connolly added.

"It's a very good win for us after last week and obviously a clean sheet and two goals [you] can't ask for more.

"We've got players here that are top Championship players and even Premier League players.

"When we're confident in stroking the ball around I don't think many teams can live with us."