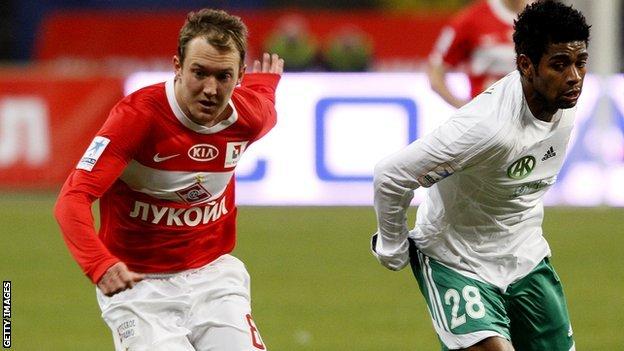 Spartak Moscow winger Aiden McGeady admits it will be odd to line up against former club Celtic in the Champions League.

The Russian side host Celtic in Group G on Tuesday at the Luzhniki Stadium.

And McGeady, who transferred from the Scottish champions in 2010 for £9.5m, is experiencing mixed emotions at facing the club he grew up supporting.

Celtic aren't used to playing on this type of pitch

And McGeady admitted to a sense of excitement at the thought of playing in Glasgow.

"To just be back playing at Celtic Park, for a different team, it's going to be a great experience," he added.

"When the draw came out my phone was ringing off the hook with everyone phoning and texting me about the draw and how good it was.

"But yeah, it's going to be exciting."

McGeady was suspended for the weekend victory over Amkar that lifted last season's runners-up to fifth in the Russian Premier League, four points behind leaders Anzhi Makhachkala.

But, despite speculation linking him with a move away from the Muscovites, the Scots-born Republic of Ireland international insisted he was enjoying life at Spartak.

"Everything's going well," he said. "I think the team is progressing well.

"We've got a new coach and a lot of new players and we're starting to gel together pretty well.

"It's going to be a difficult game for us, and, likewise, I think Celtic think the same.

"Generally, our record over the past few years hasn't been that great at home, but, possibly, Celtic aren't used to playing on this type of pitch [artificial surface], so it's possibly going to be a tricky match for them.

"It's going to be an exciting game."

Spartak are looking for their first points in Group G after losing 3-2 away to favourites Barcelona in their opening game.